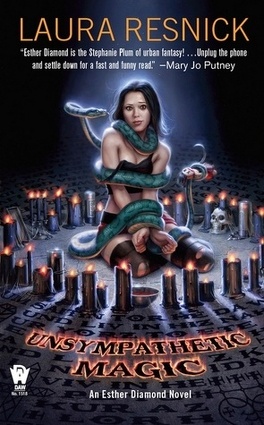 Acting jobs don't just grow on fire escapes… so struggling actress Esther Diamond is outraged when her guest role as a hooker on The Dirty Thirty, a controversial TV drama, is jeopardized by zombies, angry spirits, and a voodoo curse.

Meanwhile, the talented teens whom Esther is coaching at a Harlem cultural center are also being attacked by the sinister supernatural power that's spreading through Manhattan. And Esther's love life goes from bad to worse when her bed bursts into deadly mystical flames while her would-be lover, Detective Connor Lopez, is trying to get her into it!

Since the show must go on (and the rent must be paid), Esther boldly helps her friend Dr. Maximillian Zadok, a 350-year-old sorcerer whose day job is protecting New York City from Evil, combat the supernatural forces at work in Harlem during a sweltering summer heat wave. But will Esther's courage lead her to becoming a human sacrifice on the altar of Evil's voracious appetite?