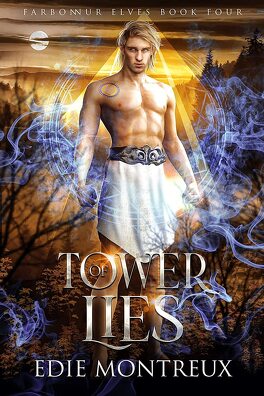 A glass pyramid. A dying goddess. A brother back from the dead. Oh, and a true love with amnesia.

Alvarick thought blood mages were the worst of his problems. Now, he's enmeshed in tower intrigue between his brother and his top advisors, all while trying to keep everyone from claiming Velden as their favorite playmate before the prophesied Yule bonding ritual to unite elfkind. Alvarick has two months to convince them true love is more important than magic when battling a blood demon.

Worst of all, Velden has no memory of the last two centuries, let alone the time they've spent together. The key to repairing his memory is the only thing keeping their goddess alive.

There are two ways to complete the bonding ritual. Will the fate of all mortal life rest on a brotherly bond crafted from prophecy instead of love? Or will Alvarick and Velden's true bond be the first stone cast at this glass tower of lies?

Tower of Lies is 93,000 words of m/m romantic fantasy goodness and should be read after Hives of Sorrow and before Tree of Secrets in the Farbonnur Elves series. ToL has a happily ever after ending for our main fated mates pairing, but happy for now overall. It introduces a bratty king and his sassy but sweet fated mate. ToL also has found and real family, brotherly hate/love, a pyramid full of powerful yet clueless jerks, a newborn queen, sunshine/grumpy banter between fated mates, and more ritual spice than a Yule fruitcake.