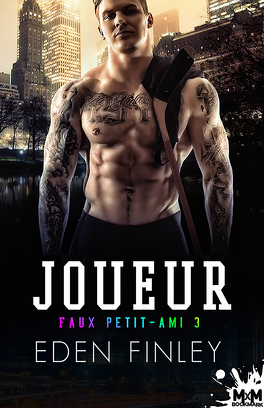 The door to the bathroom opens, and I assume it’s one of my brothers come to check on me as per Ma’s orders.

“I’ve been waiting for you—” I turn and come face to face with someone who is definitely not one of my brothers.

This guy who is the spitting image of a blond Superman, even down to the wild curl across his forehead and an adorable chin dimple, stares at me with wide, pale blue eyes. He’s smaller than me but still probably six foot easy. My gaze travels down his slim build, and when I meet his eyes again, I replay my words and take in our location—a gay-friendly hangout in the South End—and I think I might’ve just come onto someone for the first time since Ash and I split. Unintentionally, but still.

“Not you. I thought you were my brother.”

The guy screws up his face. Oh, fuck, now it sounds like I’m waiting in the bathroom to hook up with my brother.

He cocks an eyebrow. “From your brother?”

“From my entire family.”

His warm gaze trails over me and lingers on my tattooed arms. His heated stare causes a stirring in my groin, reminding me that I haven’t had sex in six months.

“I’m guessing you belong to the giant Norse gods out by the bar?” he asks.

My brothers and I often turn heads, especially when we’re all together. I’m the runt, and I’m six four. My brothers always joke that I took up hockey so I could add height with my skates.

We’re seated in one of the restaurant’s private rooms, but I’d say my brothers are about due for another drink.

“You mind if I …” He points to the urinal behind me and adjusts the strap of his messenger bag on his shoulder.

“Oh, right. Sure.” I move toward the sinks so he doesn’t think I really am creeping in the bathroom for a hookup.

“So why are you hiding?” he asks, and I don’t know if he’s actually interested or just trying to break the awkwardness over the sound of him taking a leak with me lurking here.

After he’s zipped, he turns around and eyes me from top to toe again, and I can’t say I hate it. If anything, my instinct is to puff out my chest and flex my biceps.

“They want you to take him back?” He moves beside me to wash his hands.

Interesting that he assumes I’m gay. Although, the whole accidentally hitting on him thing probably helped him come to that conclusion. This is where I should normally deny it—where, under any other circumstance, I would—but for some reason, I can’t bring myself to lie to this cute stranger. He just scrutinized me hard enough that if he was going to recognize me as a winger in the NHL, he would’ve already picked up on it.

“They want me to come out at work so he’ll want me back,” I say. That’s a vague explanation, because it’s not like I’d be coming out to an office of twelve people; it’d be coming out to the entire world. Tabloids would jump on it faster than a drug-addicted popstar.

The guy winces. “Tough situation. One that rarely works without resentment.”

“The thing is, I’m twenty-four. I have a long career ahead of me, and I don’t want anything to throw me off. I want to be established first.”

“What do you do? Let me guess …” He mockingly assesses me this time, his finger rubbing across the thin layer of blond scruff on his chin. I wonder if he’s using this as an excuse to rake his gaze over me again. His eyes seem to lock onto my arms a lot, which are covered in so many tattoos there’s no bare skin anymore. “I think, despite the tats, you’re gonna be a contradiction. You’re bulky and tatted up, but I bet you’re in something like corporate business.”

I know way better than to tell him the truth. “Something like that. Very much a man’s world, anyway.”

Our eyes lock, and he relaxes into an easy smile as he reaches for the paper towels. For the first time in a long time, I find myself appreciating a man who’s not Ash. Not just in a he’s hot kind of way, but in a way where I actually feel a flutter of something in my gut. A couple of months ago, I didn’t think that’d ever be a possibility.

The door opens again, and this time it is one of my brothers.

I drop my hand fast.

“What the fuck is taking so—” Vic spots the guy next to me. “Oh. Gotcha. Hurry up and do what you gotta do. I’ll stall.” After dropping that, Vic turns on his heel and walks out.

“So, that was one of your brothers,” the guy says, his tone amused.

“You see what I have to put up with?”

“It’s because they want me to be comfortable in my surroundings, as if I can’t be okay at a restaurant that’s not a gay hangout.”

He tries to keep his face passive, but a hint of a smile comes through. “It’s great they love who you are.”

“You go have dinner with them then,” I grumble.

He stares at the door and then back at me. “All right.”