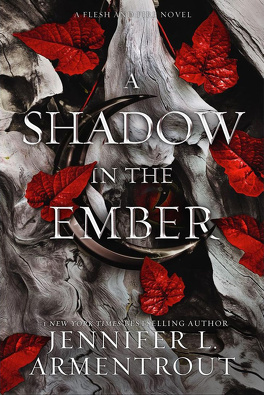 Flesh and fire, Tome 1 : A shadow in the ember

“Death always finds you, one way or another.”

“Rest means sleeping, Sera, which usually requires that you lay down, unless you’re able to sleep sitting up. I would find that impressive if so,” he said.

It is far easier to be lied to than it is to acknowledge that you have been lied to.

“I want you to be silent,” Ash repeated, slamming his hand onto another’s face. The silvery energy washed over it, and the thing shrieked. He pushed it aside, and it spun, flailing and falling. “And I want you to think about what you just did.”

I blinked. “Do you want me to find a corner to sit in, too?”

“One of the bravest things to do is to accept the aid of others.”

“Why did you even ask for a

Consort? When you made the deal, you could’ve asked for anything.”

“The answer you seek is a very complicated one.”

“Are you suggesting that I’m not clever enough to understand?”

“I’m suggesting it’s a conversation that should take place when you’re fully clothed.”

“And you don’t run the risk of me attempting to drown you?” I snapped.

“Did you kill that man?”

Smoothing out the skirts of the gown, I crossed my ankles. “I believe he slipped and fell upon my blade.”

“Was it his throat that fell upon your blade?”

It was then that I realized I might have come to the end of whatever goodwill this god had regarding me.

My mouth dried, and the dread of what was sure to come settled heavily in my chest. I was teetering on the edge of death. “You might as well get on with it.”

“Get on with what, exactly?”

“Killing me,” I said, the words like wool on my tongue.

His head lowered a bit. When he next spoke, his breath coasted over my cheek. “Killing you?”

He drew back his head far enough that I could see that he had one eyebrow raised. “Killing you hasn’t even crossed my mind.”

Surprise flickered through me. “Why not?”

He was silent for a moment. “Are you seriously asking me why I haven’t thought about killing you?”

“You’re a god,” I pointed out, unsure if he was being truthful or just toying with me.

“And that is reason enough?”

“It’s not? I threatened you. I pulled a dagger on you.”

“More than once,” he corrected.

“No one speaks to a god or behaves toward one in such a way.”

“They typically do not,” he agreed. “Either way, I suppose I’m not in a murderous mood tonight.”

If I had a child, or if any descendant of mine had been harmed, I would burn through both realms just so I could flay the skin from the body of the one who’d hurt them.