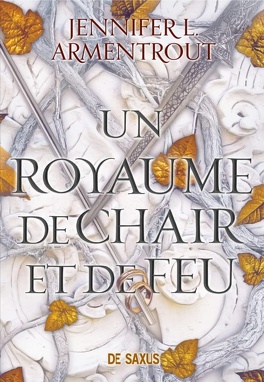 From Blood and Ash (7 livres)

I shot to my feet. “Let me make one thing clear. I don’t know if you realize this or not, Casteel, but I’m not duty-bound to obey a single thing you say.” Casteel stiffened. “And maybe you should actually look at me when you try to order me to do things,” I tacked on. He turned to me, his head cocked.

“But are you listening?”

“Oh, man,” Delano murmured under his breath as the rest of the room went dead silent. “Someone is getting stabbed again.” Someone, I think it was Jasper, snorted.

“Oh, I’m listening,” Casteel replied. “Maybe you should try that. Along with this thing called common sense.”

“Definitely getting stabbed,” Kieran confirmed. I stepped around the table, aware that Delano appeared to be sinking into his chair.

“Are you armed?” Casteel asked with a smirk. “You are, aren’t you?”

“I’m so confused by what is happening here,” Nova whispered with a slight frown.

“Apparently, she already stabbed him once,” Jasper informed the Guardian. “In the heart.” Nova looked at me.

“And she cut me earlier tonight. Threw a knife right at my face another time,” Casteel ticked off his fingers. “Then this one time, in the woods, she—”

“No one wants to hear about how many times I’ve made you bleed,” I snapped.

“I do,” Jasper remarked.