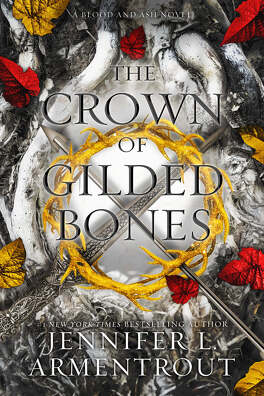 From Blood and Ash (7 livres)

She's been the victim and the survivor…

Poppy never dreamed she would find the love she’s found with Prince Casteel. She wants to revel in her happiness but first they must free his brother and find hers. It’s a dangerous mission and one with far-reaching consequences neither dreamed of. Because Poppy is the Chosen, the Blessed. The true ruler of Atlantia. She carries the blood of the King of Gods within her. By right the crown and the kingdom are hers.

The enemy and the warrior…

Poppy has only ever wanted to control her own life, not the lives of others, but now she must choose to either forsake her birthright or seize the gilded crown and become the Queen of Flesh and Fire. But as the kingdoms’ dark sins and blood-drenched secrets finally unravel, a long-forgotten power rises to pose a genuine threat. And they will stop at nothing to ensure that the crown never sits upon Poppy’s head.

A lover and heartmate…

But the greatest threat to them and to Atlantia is what awaits in the far west, where the Queen of Blood and Ash has her own plans, ones she has waited hundreds of years to carry out. Poppy and Casteel must consider the impossible—travel to the Lands of the Gods and wake the King himself. And as shocking secrets and the harshest betrayals come to light, and enemies emerge to threaten everything Poppy and Casteel have fought for, they will discover just how far they are willing to go for their people—and each other.

And now she will become Queen…

Casteel leapt down, immediately reaching for me. I took his hands and he lifted me from the saddle, placing me on the ground beside him. His hands slid to my hips and lingered.

I looked up at him, and he bent down, pressing his lips to my forehead. The sweet kiss tugged at my heart. His arm stayed around me as we turned.

Kieran and Jasper had stopped in front of us. It wasn’t them that had caught my attention. It was the wolven not in their mortal forms. They had followed us into the courtyard, and there were… gods, there had to be hundreds of them. They prowled along the stables and the estate. Dozens leapt onto the walls of the courtyard.

Others climbed the wide steps of the estate and stood between the pillars. They parted, creating a path between us and the bronze doors, but before Casteel or I could move, they shifted. All of them at once.

Fur thinned and gave way to flesh. Bones cracked and shrunk, fusing back together. Limbs straightened and claws retracted into nails. Within seconds, they stood in their mortals forms. There was a whole lot of skin on display. More than I ever needed to see.

My cheeks started to heat as I struggled to not look, well, anywhere. I started to ask Casteel what was happening, but the wolven moved simultaneously.

Right hands balled into fists. They placed them over the center of their chests and then sunk onto one knee, lowering their heads. All of them—the wolven in the courtyard, the ones on the wall, on the steps and between the pillars.

I felt a little dizzy as Jasper and Kieran turned to us and followed suit.

All of them bowed.

“They have never done that for me,” Casteel murmured.

Kieran lifted his head just enough for me to see he smirked.