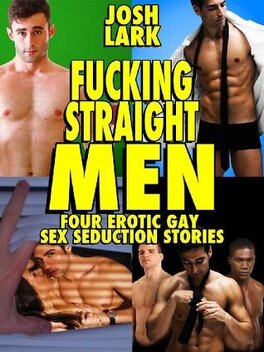 Levi is a gay grad student working under the happily married (and regrettably straight) Prof. Hank Harris. When the professor's wife is gone for a lecture and Levi comes over to work on his teacher's new research project about gay sex, however, he'll learn just what working under Prof. Harris really means, and just what kind of research he'll be providing...

When Daniel married Lissa, he didn't think about the fact that it meant his days of sexual exploration were over until it was too late. The question of what it would be like to be with a man has always puzzled him, and Daniel gets a chance on a honeymoon trip where Lissa's almost identical twin brother has tagged along. When Daniel asks his brother-in-law if he ever thinks about fooling around with guys, will his new brother say "I do"?

When bisexual Dave hears his hunky straight roommate Charlie having sex with his new girlfriend next door, he remembers the time he spied on Charlie jerking off and how hot it had been. Drawn to Charlie's window one more time, Dave gets an eyeful of something that he never expected, and much more. Will Dave get punished for being a perv and a peeping tom, or do Charlie and his girl have other, sexier plans for him?

Trent is a piece of shit boss. As the CEO's son, he knows he can say and do whatever he wants, including harassing his employee Jim for being openly gay at work. Trent can't keep his cocky mouth shut, even at office sensitivity training, until Jim has had enough. When Trent fires Jim's coworker and friend, Jim takes it upon himself to finally show his boss the real meaning of sexual harassment, and he gets the whole office in on the fun...