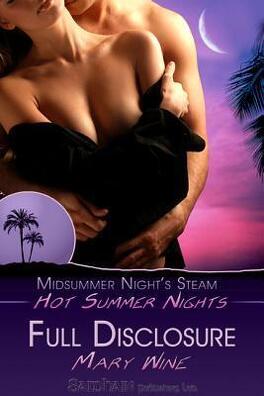 Her boyfriend is back...and that's a major problem. Antonia isn't ready to face the one man who shakes up her world...

Antonia doesn't need to look at forbidden fruit. The taste still clings to her lips, haunting her with just how good she and Danton had been together...

...Right up until he informed her that he had to get married because he was going to be a father. That just made it worse. Inside him was a man worth dreaming about, even if she knew it was in vain.

Danton always double-checked his facts. It was a habit that kept him alive during missions that should have killed him. His impromptu wedding was no exception. There wasn't going to be any consummation of the vows until he had a paternity test. But doing the right thing had cost him the one woman he loved.

Until the test came back negative. Now there is nothing that will stop him from coming back with the prize he'd been forced to abandon three months ago. Toni was going to be his, right after she got the full disclosure on his hasty wedding and the blunt fact that he loved her.

“Damn it, Toni. Don’t look at me that way.” He made a disgusted sound under his breath before he dug her cell phone out and tossed it across the distance to her. “I told you we need to talk.” He watched her catch the little bit of technology. He stared at her for a long moment to see what she’d do with the returned cell phone. A frustrated growl escaped her lips as she stuffed it into her purse. Calling the cops wasn’t the answer, in fact, it would only serve to tie her into a knot of tension as she waited for Danton to corner her in some other place. The man didn’t know the word “quit” existed in the English language. If he intended for them to have a talk, he’d keep appearing until he was satisfied. The man’s tenacity was frustrating but it was also admirable—if you enjoyed satire.

He grunted approval. “Next time, dial it in your pocket so that your unwelcome guest doesn’t know what you’re doing. You’d have been dead long before the local patrol car made it into your driveway, if that was my intention.”

A ghost of a grin curved his lips. “Don’t make suggestions you don’t want me to take interest in. Seducing you sounds like a lot of fun.”

Toni hissed at him. Conversations with Danton spiraled out of control faster than paper caught fire. Only tonight, she was the one dealing with the heat boiling up inside her. Her body didn’t much care about the details. But she sure didn’t need him painting a picture that she’d have to sleep with in her unsatisfied dreams once he went home to his new spouse. “What do you want, Danton?”

His face lost all traces of humor as he moved closer. His feet never made a sound, even on her hardwood floor. Toni fought the urge to wiggle backwards as he kept moving. She had to lift her chin so their gazes locked, but she refused to budge and show him any weakness. That need burned bright enough to keep her in place in spite of his body looming over her. He turned his hand over and stroked one side of her face with the back of it. Sensation rippled down her spine. Her nipples tingled before drawing into tight little nubs. Danton’s eyes blazed into hers as that ripple went lower, making her shift as her clit softly throbbed.

“You. I want you back, Toni.” His voice was husky with desire.

His opposite hand snaked around her waist. That quickly she was a captive of his stronger body, held against him while his fingers moved around to cup the back of her head. He considered her intently, like he was memorizing her trapped in his embrace. A shudder shook her body as her hands pushed against his chest. It was a feeble excuse for a protest, one she couldn’t maintain for very long. Her hands smoothed over his chest, transmitting just how hard the man who held her still was. Heat raced through her veins as she felt her mouth go dry in anticipation of his kiss.

It had been too damn long since he’d kissed her. Right and wrong didn’t hold much value as she watched his gaze drop to her mouth. On instinct she licked her lower lip. His eyes followed the tip of her tongue as they narrowed.

“You are so damn sexy. The way you move, even breathe. It turns me on instantly. I haven’t had a single night’s sleep since we parted without seeing you in my dreams.” His mouth blocked out any response she might have made. His hand tightened on the nape of her neck to control her head. Pleasure flooded her starving senses as he pressed her lips apart. He’d been the last man to kiss her and right then, it seemed like she’d been poised for three whole months waiting for this second. A little mutter of delight rose from her throat. Danton didn’t rush the kiss. He lingered over the first meeting of their mouths before increasing the pressure by small degrees. He teased her to open her jaw, and the promise of sharing his kiss again was too much.