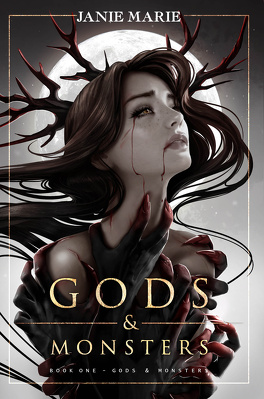 As Jane learns that monsters are real, that legends are truth, and that the man who saved her life is an immortal knight, it's her secret past with the Angel of Death that changes everything.

When the plague of all plagues begins its destruction, it isn't a miracle cure by scientists or even our military that saves us.

No, our saviors are monsters.

Jane appears to be nothing special. In fact, she's a sad sight to behold. Afflicted by the sorrow of her tragic past and failing marriage, the young mother of two is as terrified as every other soul when humanity faces doom. Yet, when hope seems lost, Jane does something even her estranged husband fails to--she fights. And she's not alone.

David and his companions are what our world has dismissed as mere legend. Their duty to the human race brings them across the country, and they all know it is no coincidence when they cross paths with Jane.

As it happens, Jane is special. She's destined to rid the world of darkness.

With monsters from every nightmare seeking her out, a noble immortal knight showing her what love truly feels like, a secret past that even Jane can't remember, and even more powerful beings wagering the fate of her soul, Jane will embark on an epic journey to save her family and the world.

So what will happen when they realize she's the greatest monster of them all?

If you want an instant, fearless heroine, Jane won't be your gal. If you actually want to read a deep, epic story and witness every character grow throughout their journey, give this story a chance but be prepared for realistic pacing for character growth.

Book One is 155,000 words, but the entire trilogy is over 700,000. This is just the beginning. Each book completes a part of the whole journey and should be read in its entirety.

Warnings: Triggers for abuse, mental health disorders. Heavy violence, horror, strong language, emotional and controversial themes, sex, rape(not praised), will have multiple loves for the heroine(stressful but worth the wait and makes sense when it's meant to)

*Please do not criticize the mental health disorders in this story or how the character copes with these disorders as well as grief, trauma, and confliction. This book was written for a very specific group of readers in mind, and bashing Jane's path to heal, how she reveals her tragedies, and how she raises her children with these disorders may cause distress to these readers. Be considerate. Everyone grieves differently, loves differently, and heals from trauma in their own ways. Criticizing a survivor in any way is awful, so please be mindful with your reviews.