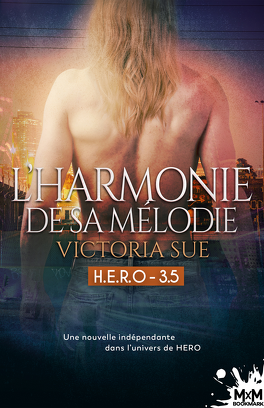 "What are we doing?" Seb asked in confusion.

Gray nodded to the door. "We're going into your backyard."

Seb blinked, half convinced his excellent lip-reading ability had suddenly stopped working. "Why?"

"Because I do tai chi. It's excellent for balance, posture and relaxation. You're going to do it with me."

Seb was sure he spent more time around this guy with his mouth hanging open than anything else. He was going to protest, but Gray was no longer looking at him. He was simply holding his door open. Tai chi? He'd heard of it, obviously, but wasn't that some sort of martial stuff? Like tae kwon do, defensive shit. Maybe his new bodyguard thought he ought to be able to protect himself. Seb followed Gray down the stairs. Yeah—he could actually get on board with that. Everyone treated him like he was delicate around here. He wouldn’t mind something a little different.

They walked through and out the kitchen door after Gray disabled the alarm. Gray seemed to know where he was going, so he must have been in here last night. He unbolted the big wooden door and stepped outside. Seb followed him and cringed as the icy temperatures hit him. “You know the dining room’s empty,” he said hopefully. Then he thought again as Gray glanced at him. “I could push back the furniture so we don’t break anything.”

Gray came to a stop. “Why would we break anything?” He looked genuinely puzzled.

Seb shrugged. “I guess when you jump me.”

Gray’s eyes narrowed. “I’m not going to jump you.”

“Well, maybe not, but I guess there’ll be hold positions, right? Maybe choking?” Seb put his arm up and tried to see if he thought he could get it around Gray’s neck like they did on TV. Gray wasn’t that much taller than him. He focused back on Gray’s face in case he missed any instruction to see Gray’s lips tilted in a half smile. Had he missed him saying something?

“You don’t have to worry about hurting me,” Seb assured him. “I’m stronger than I look.”

“Good to know,” Gray said and pointed to the grass. “Stand there.”

Seb obediently moved to about six feet away from Gray and turned to him expectantly. “What do I do?” he asked eagerly. “Do you want me to pretend I don’t see you?”

Gray tilted his head to the side, and Seb flushed nervously. He was excited. He probably mangled that question.

“Do you—” he started enunciating slowly.

“I’m not sure what you think is going to happen, but I want you to look at me. Stand with your feet apart and at about the same width as your shoulders and bend your knees.” Gray demonstrated. Seb copied him, a little worried he was going to ask Seb to do some advanced move he’d never seen. Should he tell Gray he was a beginner? Did Gray think Andrew had taught him to defend himself?

“Take a deep breath at the same time as you raise both arms to give your lungs room to expand.”

Seb copied, feeling a little silly to be honest, and shot a quick glance at the house.

Gray stopped, and Seb focused on him. “Concentrate on me,” he chided, and Seb flushed slightly. “Now when you breathe out, let both your arms come down, palms down as if you were going to touch your thighs.”

Seb did, then waited expectantly, but Gray just closed his eyes and repeated the movement. Seb waited a beat and then copied. Maybe this was some warm-up routine? Gray opened his eyes but kept moving, and Seb copied. “Don’t forget to breathe.”

Seb took a deep breath in. The cold, crisp air felt kind of nice. His experience with the outside lately was just in between the car and whatever building he was coming out of or going into. Gray nodded approvingly. “I’m going to turn around. I won’t speak, but I want you to be able to copy me. If I need you to listen I will touch your shoulder. As soon as you have the second move down just close your eyes. Don’t forget to breathe.” Seb watched part astonished and part fascinated as Gray—who he was sure could kill him with his little finger—breathed and posed, well, like some kind of dancer, if that was even the right word. He repeated a second pose and then a third. It was one of the strangest things Seb had ever seen— completely incongruous on the big man—and Seb felt really silly for the first few minutes until he decided watching Gray and not doing it was just as lame, so he might as well. It was weird but after a few repetitions, Seb’s breathing seemed to get deeper and he relaxed into the monotony. It was probably the nearest he had ever gotten to sleeping while standing up.