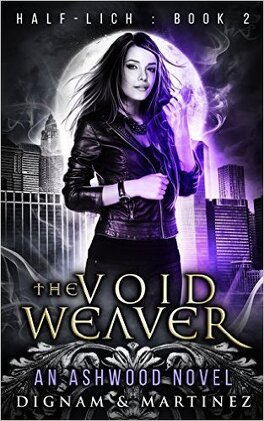 Their enemy is getting away. Their danger is just getting started… Alice is in hiding. Holed up in a magically-protected house without her main weapon, the supernatural bounty hunter wants nothing more than to hunt Nyx down. But her enemy is in hiding too, and without her powers the dangerous Pain Children are more than a match for her. When Alice learns that Isaac Moreau remains in Magistrate custody, she has no choice but to follow Nyx’s trail without backup. Her only chance to catch the villain may lie in Isaac’s attempt to learn the dark, deadly secret of the Void. His failure could get them all killed in the process. The Void Weaver is the second book in the Half-Lich series, a set of Urban Fantasy Paranormal Thrillers. If you like intriguing characters, supernatural monsters, and sizzling chemistry, then you’ll love Dignam and Martinez’ next thrilling installment that draws comparisons to Ella Summers, Ilona Andrews, and Patricia Briggs! What are readers saying about the Half-Lich series: "This is Urban Fantasy at its best." "Paranormal how it's supposed to be done; it seems to me like the 'mature' ideal to which all paranormal books aspire, not only in meticulous editing but in content as well." "This is not your cookie cutter story line. Fresh and New Urban Fantasy that will get you hooked instantly." Buy your copy today and get ready for the next rush!

Something is chasing me. I can hear it, the click-clacking of… something. Nails? Whatever it is sounds metallic. These objects scrape against each other and my stomach goes cold every time the awful sound touches my ears. My heart doesn’t stop pounding. It can’t. I need the adrenaline if I want to get away, but it’s dark in the movie theatre and I’m running out of places to hide. The auditorium is the only place I can turn into, so I do, and it follows, whistling a happy tune as it goes. I know what the objects it’s carrying are, now. I don’t need to see them.

They’re scalpels, and if he catches me, he’ll cut me open again.

The sound of grumbling thunder rolling overhead dragged Alice out of a deep but restless sleep. When the dream slipped away like morning mist, Alice grabbed her phone from the bedside table and looked at the time. Seven in the evening had come and gone. She had laid her head down for a nap with the intention of only resting for half an hour, but had somehow managed to sleep for three. The thunder rolled off into the distance in a series of cascading explosions of sound. Alice rubbed her eyes, unlocked her phone, and updated herself on what was going on.

No calls, no messages, and no emails except for the usual garbage she didn’t care for. The silence in the house suggested Dustin wasn’t around and Isaac… the last time she had seen Isaac had been in the Greek exhibit at the Ashwood Imperial Museum. He had kissed her on the forehead and told her, promised her, everything would be okay. And she had believed him. She had allowed herself to be ushered along the staff corridor, through a hidden door nestled between the male and female restrooms, and into a car where Emily and Nate were waiting.

She thought he would have been right behind her, and for what seemed like forever she had waited in that car, hoping to see the door she had just come out of open up again. But then Dustin’s phone buzzed. He read the message, then started the engine and told her they had to leave. She was about to throw some questions at him when her own phone buzzed inside her pocket with a message from Isaac.

“Whatever you do, don’t try to help me.”