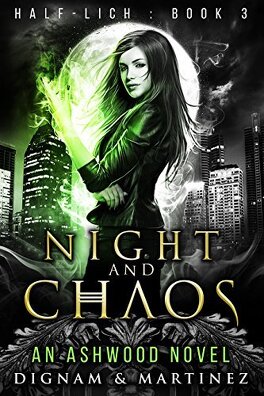 The final book in the hit Half-Lich Trilogy!

As night gathers, chaos rains down on the city of Ashwood like acid. The New Order of Void Weavers led by Isaac Moreau are gaining strength, but the shield separating the world of humans from the things hungrily waiting for their turn at the batting plate is fractured and weak, and repairing it is no small task. Meanwhile Alice Werner, the supernatural Bounty Hunter, has her hands full with an increasing number of contracts, and as Ashwood starts simmering toward a boiling point, it's only a matter of time until something gives and all hell breaks loose.

The night was still and cool, and strangely empty. Even the crows were nowhere to be seen, and there were always crows in Ashwood; just as there were always rats near corpses. Alice unlocked the door to Werner Investigations and pushed it open with her shoulder, but it only gave about half a foot before refusing to open any further. She peered around the gap and cursed. Cameron, who was standing behind her, tried to peek over her shoulder to see what the holdup was.

“The boxes have fallen again.”

Alice pushed her aching shoulder hard against the door and squeezed through the gap. The last time she had left this place there had been a neat stack of sealed boxes behind the door. The boxes fitted neatly enough to allow the door to open without restriction provided they remained where they were. But ever since she moved her Chest of Haunts to her office, things had a habit of moving around all by themselves.

She dragged a box marked bedroom away from the door. This one had fallen flatly. Another box marked kitchen had fallen at an angle. Alice stacked them on top of the Chest of Haunts which was tucked in a corner.

Cameron pushed the door open and let himself inside. “I don’t think that thing likes you stacking boxes on top of it,” he said.

“I don’t think so either,” Alice said.

“Is there any reason why you haven’t moved it into Isaac’s place yet?”

“Same reason I haven’t moved a bunch of other stuff into his place, I guess.”

Cameron gave her a sidelong glance. “And why’s that?”

“I have my reasons,” she said, kneeling in front of the ornate brown chest. She pulled a key out of her back pocket, slipped it into the lock, and unlocked the chest. When she opened it, a breath of cool air seemed to exhale from within, causing the hairs on the nape of her neck to stand up.

From out of her backpack Alice produced four Polaroids containing blurred half-shots of the same entity. She scanned them over one by one, flicking them between her fingers. The images were blurry and dark, and difficult to make sense of; splotches of black and light blue against an in-motion backdrop of artificial street light. She decided that, photographically speaking, these weren’t her best shots, but she had been in combat with the thing when she had taken them and was still getting used to Trapper 2’s rhythms, but she had nailed the thing with the last shot.

A blurred, bloody face came charging out of the picture and quickly retreated again.

“This is the fourth one this month,” Alice said, sighing.

“What do you think it means?” Cameron asked.

“It means she’s up to something,” Alice said, and she tossed the Polaroids of the Pain Child she had destroyed into the Chest of Haunts. These pictures didn’t contain the creature’s essence as her older pictures of ghosts and souls did. Trapper had been on its MAT setting and she had destroyed the creature by continually attacking it. But the Polaroids made for decent mementos.

One more down, she thought as she closed and locked her Chest of Haunts before drawing herself upright.