Harley Merlin, Tome 10 : Finch Merlin and the Fount of Youth 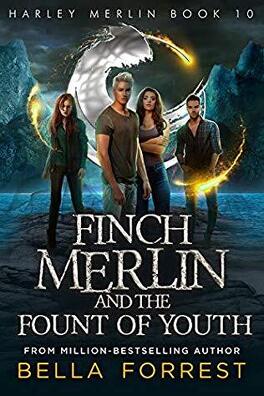 What's a guy gotta do to appease an evil god?

It's been a year since Katherine tried to take over the world, and Finch Merlin is itching to do something other than odd jobs for Erebus, God of Darkness. Erebus promises he'll free Finch of his servitude after he completes one final task - finding the Fountain of Youth.

Finch has no idea why Erebus wants eternal youth, since the guy is already an immortal being. All the secrecy makes Finch uneasy, but he has no choice but to obey.

He knows he'll get by with a little help from his friends, namely his old pal Garrett, who's still dealing with the whole "being resurrected" thing. There's also Ryann, Harley's foster sister, now a regular at the San Diego Coven. Whenever she's around, Finch feels butterflies in his stomach. Or maybe it's just a bad case of indigestion.

Together, they'll infiltrate the flashy world of the magical elite in search of a rare artifact, one that will help them capture a poltergeist - the angry ghost of famed adventurer Ponce de Leon.

Harley Merlin, Tome 10 : Finch Merlin and the Fount of Youth