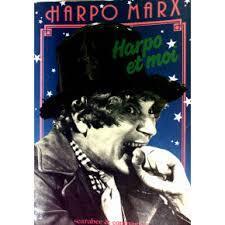 'There is a character who goes by the same name I do...

He wears a ratty red wig and a shredded raincoat. He can't talk but he makes faces, honks a horn, whistles, blows bubbles, ogles and leaps after blondes... I don't begrudge him anything because he started out with no talent at all' Groucho Marx

The Marx Brothers will remain immortal for as long as comedy and cinema are debated; while Groucho made witty gags and one-liners, Harpo provided the lunatic visuals to accompany them. Harpo Speaks! takes us on an energetic caper through Harpo's life, drawing on rich memories of boyhood; meeting with everyone ranging from gangsters to Edward VIII; gambling; partying and a golden age of Variety, Broadway and the cinema. Renouned as the silent man on screen, Harpo Speaks! provides a unique insight into an entertainment legend in his own words.