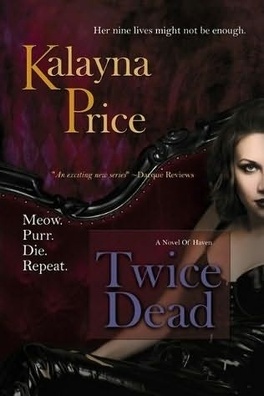 Newly undead shifter-turned-vampire Kita Nekai is coming to grips with the reality that her cat has not awakened since her change. What she needs is a little time to adjust to her new liquid diet and the increasingly complex attraction to her sire, Nathanial. What she gets is a headless harlequin. With the body count rising, Kita is dragged into a dangerous game of vampire politics. Her involvement draws the attention of an ancient vampire known as the Collector who has a penchant for acquiring the unusual - like a pureblood shifter-turned vampire. Kita still has unfinished business of her own and finds herself deeper in magical debt. It's a bad time to be a kitten who can't slip her skin. Kalayna Price's debut novel, ONCE BITTEN, earned rave reviews and reached #1 on Amazon.com's "Fantasy Bestseller List." TWICE DEAD returns readers to a dark, seductive world where magic rules and ancient loyalties collide with modern challenges.