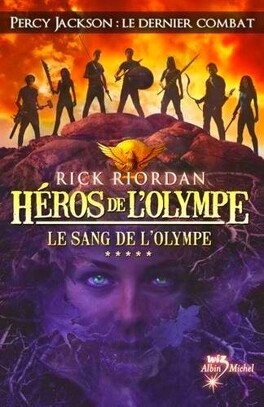 If they find out we’re demigods—”

Jason tried to believe that.

The suitors: a hundred of the greediest, evilest cutthroats who’d ever lived. When Odysseus, the Greek king of Ithaca, went missing after the Trojan War, this mob of B-list princes had invaded his palace and refused to leave, each one hoping to marry Queen Penelope and take over the kingdom. Odysseus managed to return in secret and slaughter them all—your basic happy homecoming. But if Piper’s visions were right, the suitors were now back, haunting the place where they’d died.

Jason couldn’t believe he was about to visit the actual pal-ace of Odysseus—one of the most famous Greek heroes of all time. Then again, this whole quest had been one mind-blowing event after another. Annabeth herself had just come back from the eternal abyss of Tartarus. Given that, Jason decided maybe he shouldn’t complain about being an old man.

“Well . . .” He steadied himself with his walking stick.

“If I look as old as I feel, my disguise must be perfect. Let’s get going.”

As they climbed, sweat trickled down his neck. His calves ached. Despite the heat, he began to shiver. And try as he might, he couldn’t stop thinking about his recent dreams.

Ever since the House of Hades, they’d gotten more vivid.

Sometimes Jason stood in the underground temple of Epirus, the giant Clytius looming over him, speaking in a chorus of disembodied voices: It took all of you together to defeat me. What will you do when the Earth Mother opens her eyes?

Other times Jason found himself at the crest of Half-Blood Hill. Gaea the Earth Mother rose from the ground—a swirling figure of soil, leaves, and stones.

Poor child. Her voice resonated across the landscape, shaking the bedrock under Jason’s feet. Your father is first among the gods, yet you are always second best—to your Roman comrades, to your Greek friends, even to your family. How will you prove yourself?

His worst dream started in the courtyard of the Sonoma Wolf House. Before him stood the goddess Juno, glowing with the radiance of molten silver.

Your life belongs to me, her voice thundered. An appeasement from Zeus.

Jason knew he shouldn’t look, but he couldn’t close his eyes as Juno went supernova, revealing her true godly form. Pain seared Jason’s mind. His body burned away in layers like an onion.

Then the scene changed. Jason was still at the Wolf House, but now he was a little boy—no more than two years old. A woman knelt before him, her lemony scent so familiar. Her features were watery and indistinct, but he knew her voice: bright and brittle, like the thinnest layer of ice over a fast stream.

I will be back for you, dearest, she said. I will see you soon.

Every time Jason woke up from that nightmare, his face was beaded with sweat. His eyes stung with tears.

Nico di Angelo had warned them: the House of Hades would stir their worst memories, make them see things and hear things from the past. Their ghosts would become restless.

Jason had hoped that particular ghost would stay away, but every night the dream got worse. Now he was climbing to the ruins of a palace where an army of ghosts had gathered.

That doesn’t mean she’ll be there, Jason told himself.

But his hands wouldn’t stop trembling. Every step seemed harder than the last.

BOOM! The hillside rumbled. Somewhere over the ridge, a crowd roared in approval, like spectators in a coliseum. The sound made Jason’s skin crawl. Not so long ago, he’d fought for his life in the Roman Colosseum before a cheering ghostly audience. He wasn’t anxious to repeat the experience.

“What was that explosion?” he wondered.