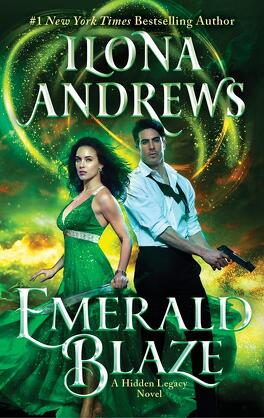 An outraged honk tore through the silence behind us. We both turned. A green Mini Cooper sped up the road and slid to a dramatic stop before the security booth. The driver’s window rolled down and Runa Etterson stuck her red-haired head out of it.

“Catalina! Step away from the dickhead!”

A strangled sound came from the booth’s speakers. It sounded suspiciously like laughter.

“I thought the Etterson matter was settled,” Alessandro murmured.

“Then what is she doing here?”

“She came for moral support. She’s my best friend.”

Runa passed the security test and was marching toward us, her car abandoned. Her face promised war. I had kept things from my family, because I didn’t want them to worry, but I told Runa everything.

“You should run,” I told Alessandro. “You’re vastly outnumbered. It’s not too late to give up and go home.”

“You! Don’t you walk away. I have things to say to you.” Runa caught up with us. “Catalina, have you lost your mind?”

Probably. “How did you even know he was here?” I asked.

Runa stared at Alessandro. “You saved my brother. I owe you a debt. If you need a favor, I’ll take care of it.”

“Catalina is my best friend. I don’t know what’s going on, but don’t get any ideas. She’s too good for you.”

“If you hurt her again, I’ll find you and then I’ll make you wish you were dead.”

“Okay.” I grabbed her by the shoulders and steered her toward the door. “Thank you for your input, Prime Etterson.”

“Dead!” Runa called out over her shoulder.

“I’m so glad for you,” Alessandro said behind me. “You’re loved by many people.”

Albert expression hardened. "I don't know who you are and I don't care. You should leave."

Albert seemed to be caught off guard. "Leave. This is your only warning."

"Albert, your welcome is over" I said with a growl.

His gaze bore into Alessandro. "No, I'll fix this and then we'll talk."

A focused torrent of power shot out of Albert. It wasn't aimed at me, but I felt the traces of it. Fear. Deep, mind-numbing, all-consuming-fear.

The awful mental deluge smashed into Alessandro. He took a sip of his coffee. "I'm still waiting."

Albert's eyebrows came together. "No matter. I'll just have to do it with my hands."

"Please do." Alessandro held his coffee out to me. "Would you mind holding this for a second?"

Runa raised her hand. "Question. How many of you knew that Bern and I are dating?"

"If you could raise your hands," Runa said.

Everyone raised their hands.

Runa looked around, her face stunned. "How? I was so careful..."

Connor smiled at her. "They're private investigators."

He was like a drug and I was a hopeless, desperate addict.

Alessandro glanced over at me again. He had bean looking at me every minute or two.

I looked directly at him. "Yes?"

He kept his eyes on the road. "Just making sure you’re really there."

Aha. "Do you think I learned to teleport?"

"No. It’s just for the first time in the last six months I know exactly where you are."

"I'm not leaving." His voice was a ragged growl. "I tried, because I can offer you nothing and you deserve so much more. You deserve someone better, but I'm a selfish bastard and I can't go away. I can't give you up."

My arm became a lever, my back became a pivot point, and Alessandro flew over my head and landed on his back with a thud.

Stunned eyes stared at me. I crouched, kisses my fingertips, press them to his lips, and walked to the driver's side.

This was a dangerous conversation. "I don't need you to take me anywhere. I can drive myself."

He smiled, a slow predatory curving of lips. "But I'm such a good driver. Are you sure you don't want me to give you a ride?"

"Are we still talking about the car?"

"Is that what the rest of you life is doing to be like, Catalina?"

Uh-huh, talking to me is like talking with a wall? Okay. "Da che pulpito!"

He opened his mouth. Nothing came out.

Alessandro glared at me. "I leave you alone for six hours and this is what happens?"

I scrambled to my feet. "I had it! I took it away from the Abyss! You-"

He kissed me. The world spun sideways. A whirlwind of emotions tore through me - relief, need, want, outrage-and I didn't know which one to pick. Outrage won.

Alessandro's lips left mine. He squeezed me to him, a huge grin on his face. "You're alive."

"You killed my construct", I ground out.