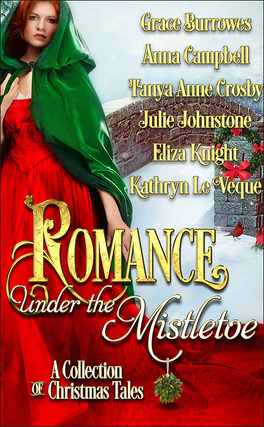 PATIENCE FOR CHRISTMAS by Grace Burrowes: Patience Friendly makes her living writing advice columns that are the talk of Regency London, but when she falls for Dougal MacHugh, her irascible Scottish publisher, common sense is not what’s needed!

HER CHRISTMAS EARL by Anna Campbell: To protect her hen-witted sister from scandal, Philippa Sanders ventures into a rake’s bedroom on Christmas Eve — now her reputation hangs by a thread, and only a hurried marriage can save her.

MISCHIEF & MISTLETOE by Tanya Anne Crosby: Suspecting he can never be the man Emma Peters wishes him to be, Lucien Morgen, the fifth duke of Willyngham, decides to break off their long-standing engagement… only to discover the innocent fiancé he set aside for years has unexpectedly blossomed into a passionate, irresistible woman.

CHRISTMAS IN THE SCOT’S ARMS by Julie Johnstone: A Scot looking for love and a lass needing saving discover Christmas wishes do come true in each other’s arms.

A KILTED CHRISTMAS WISH by Eliza Knight: Present Day, NYC. Darla Strider wonders if she’ll ever meet her own kilted hero until the day Aaron Sutherland walks into her modern café, and changes her whole world.

UPON A MIDNIGHT DREAM by Kathryn Le Veque: A wandering knight and a broken lady come together for a romantic Christmas miracle.

Your invitation to delightful Holiday reading awaits in this breathtakingly romantic anthology. ‘Tis the season to surrender to temptation!

*Please note that these stories were previously published by each individual author as novellas.*

Lady Holly St. Maur recently lost her betrothed in the Third Crusade. Heartbroken, she has sworn off marriage for good until Sir Rennington of Ashbourne makes an appearance. Is the man all he seems to be? Or does he have a darker side? A Christmas miracle awaits them both in this Christmas tale based on Edgar Allan Poe’s poem, ‘A Dream within A Dream’.

Part Four: All That We See Or Seem….

She couldn’t do it.

She knew her father was going to be furious with her, but Holly couldn’t seem to bring herself to enter the stale, warm hall and mingle with those who had come to feast and celebrate not only her day of birth but also the coming event of Christmastide. All of those happy faces of friends and allies, the same group that would have been in attendance at her wedding with Adam. She couldn’t look at them now and listen to them convey their sympathies for the path her life had taken.

Therefore, it was best for her to leave the crowd for now and work up the courage to return. She would have to steel herself against their comments. She wished she was strong; two and a half years later, she should have been much stronger but she found that she wasn’t as hardened against it all as she would have liked. It wasn’t as if the pain was sharp on a daily basis, but it was there, lingering. That group in the great hall would just make it ache again.

So she quickly headed away from the laughter and music, into the corridor that passed through a smaller dining room and through the kitchens. This was the way she had come in earlier in the day and it was the way she would go out. There were a few cloaks hanging on pegs near the kitchen door and she snatched one as she went out into the night.

The snow was falling gently as she pulled the hood of the cloak over her head, protecting her hair from the icy flakes. It was cold and dark and peaceful out here but for the light emitting from the house and the faint laughter and noise she could hear inside. For a moment, she gazed up into the sky, seeing dark gray clouds, closing her eyes to the snow that was falling on her face. She wasn’t thinking thoughts of Adam so much as she was simply thinking thoughts of her future without him.

A future she’d never imagined. It had literally been years since she’d last seen the man who haunted her daily. Today was her birthday of twenty-one-years; she’d met Adam six years ago, right before her fifteenth year. They had known each other for a couple of months before their betrothal had been announced. He’d spent another month with her family coming to know everyone before he followed Richard to The Levant.

Odd how a man she’d really only known just a matter of months had branded her so strongly. She’d fallen in love with him quickly and he with her. Sometimes, she wondered if it was a built-up dream of Adam in her head that she clung to and not the real man that he had been. His memory had grown over the years, creating something of a surreal man in her mind. Surreal or not, he’d never left her.

He probably never would.

“It is quite cold for a stroll, my lady.”

The voice came from behind and Holly whirled around to see a big knight standing behind her. She knew he was a knight from the broadsword he had strapped to his leg, but more than that, he was a very big man, built and bred for battle. She’d seen the type before, with wide shoulders, thick arms, and big hands. She wasn’t particularly alarmed by his presence even though she probably should have been. A big man sneaking up behind her in the darkness should have been concerning, indeed.

“The feast is inside,” she said. “The main doorway is around the side of the house.”

She turned away from him to continue her walk, but he did not leave. “I have been inside,” he said, his voice soft and polite. “But I came outside when I saw you. My lady, I am not a bold or lascivious man by nature but I am compelled to speak with you. Would you be so gracious as to hear me out?”

Holly came to a stop, only turning her head to look at him. “Speak with me about what?”

“It would be much warmer if we went inside.”

“If that is your wish. I thought, mayhap, that it might be too cold for you in the snow.”

Holly turned her body towards him now, looking at him head-on. He had dark blonde hair and a square jaw. He wasn’t unhandsome in the least. In fact, he was rather comely. And he had a gentle manner about him. In spite of herself, she was curious.

“What is your name?” she asked.

He didn’t hesitate. “Sir Rennington of Ashbourne,” he replied. “I am from the ancient House of Osmaston. That is my family name. Ashbourne is where I was born.”

Holly nodded faintly. “I do not know you, however, nor have I heard of you,” she said. “How did you come by an invitation to this feast?”

Rennington had anticipated that question and was prepared with an explanation. “I was invited by your sisters,” he said. Well, it was nearly true. “I… I met them yesterday in the cathedral.”

Holly’s eyes narrowed. “Did they tell you to come and speak with me?” she asked, anger suddenly in her tone. “Because if they did, you can go back inside right now. I will not be….”

He cut her off, although it wasn’t rudely done. He simply spoke more quickly than she did. “They did not tell me to speak with you,” he said. “In fact… in fact, I do believe they were vying for my affections just now. Something about not wanting to die a spinster. I swear, I have had to run for my life for fear of being forced into something I’ve no desire to be forced in to.”

Holly stared at him for a moment before a smile tugged at her lips. Her anger faded because she could absolutely believe what he had said about her sisters. “Then I do apologize if they were overeager,” she said. “They have reached an age where they are quite taken with men. But I am sure such talk on the subject will bore you, so I will not elaborate. I am sure you will find much more companionable conversation inside.”

He shook his head. “Nay,” he said flatly. “I came for food and drink and the warmth of the season. What I have seen are women prowling the great hall like predatory beasts, all of them interested in sinking their teeth into me. For my own sake, I had to flee.”

Holly couldn’t help but grin now. “Surely you know that events such as this are for matchmaking,” she said. “Do you have a wife already, then?”

“Because I lost the only woman I wanted to marry.”