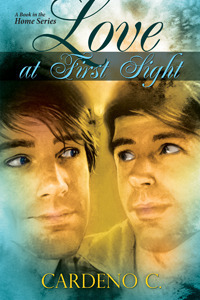 Do you believe in love at first sight? Jonathan does: the moment he glimpsed the striking David from afar, he was hooked, but David disappeared before they could meet.

More than three years later, Jonathan gets a second chance-he and David finally meet face to face, and the two fall into a passionate love affair. David turns Jonathan's previously lonely life into a fairy tale, giving him more than he ever imagined. But the past few years have been hard for Jonathan, and he's terrified that his young son and scandalous past will be too much for David. If they're going to build a future together, they're both going to have to dig deep: David for the courage to share himself in a way he's never considered... and Jonathan for the strength to tell the truth.