Home, Tome 5 : Just What the Truth Is 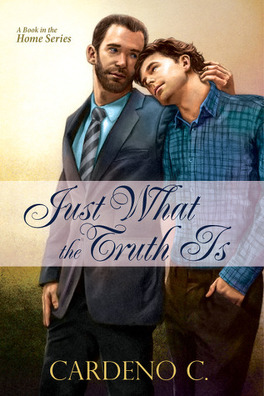 Ben Forman has been in the closet so long he’s convinced himself he’s actually straight. But his denial train gets derailed when hotshot lawyer Micah Trains walks into his life. Micah is brilliant, funny, and determined... and he just assumes Ben’s gay and starts dating him. Finding himself truly happy for the first time he can remember, Ben doesn’t have the willpower to resist.

Still, life isn’t all rainbows and happily-ever-afters. Ben loves his family, but his parents have been estranged from his brother, Noah, since he came out of the closet. Ben doesn’t want to lose them, but Micah won’t be his dirty little secret forever. Suddenly Ben’s hold on his happiness and his sense of self seems to be slipping. If he’s going to survive with his heart intact, he’ll have to own up to the truth of what he wants and who he is. The trouble is figuring out just what that truth is.

Home, Tome 5 : Just What the Truth Is