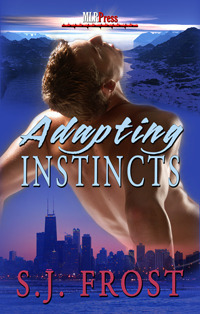 A single soft kiss, just a gentle brush of lips…but was it meant as a beginning, or a good-bye?

Every day, Carl Anderson wondered if the man…the vampire…who gave him that kiss would appear in his life again. In that time, he’s worked to come to terms with the existence of vampires, and the dangers they and their enemies pose. Always looking over his shoulder for a vampire or hunter stalking behind him, Carl wishes he could feel safe again, like he did when Egill was at his side.

As a Viking warrior and member of vampire society’s ruling body, the Tribunal, Egill Dalgaard is used to being in control of all things. But months ago, he did something that started to unravel his orderly life. He gave a kiss to a man who he was drawn to, and now, he hasn't been able to stop thinking about. He has his reasons for keeping his distance, but when he sees Carl again, all logical thoughts begin to fade.

When Carl’s actions inadvertently put Egill’s immortal life in danger, Carl must decide which path to take; whether to walk deeper into vampire society, or turn his back on the only man who’s ever made him feel secure.