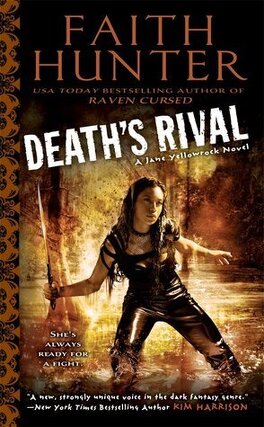 For a vampire killer like Jane, having Leo Pellisier as a boss took some getting used to. But now, someone is out to take his place as Master Vampire of the city of New Orleans, and is not afraid to go through Jane to do it. After an attack that’s tantamount to a war declaration, Leo knows his rival is both powerful and vicious, but Leo’s not about to run scared. After all, he has Jane. But then, a plague strikes, one that takes down vampires and makes their masters easy prey.

Now, to uncover the identity of the vamp who wants Leo’s territory, and to find the cause of the vamp-plague, Jane will have to go to extremes…and maybe even to war.

“Vamps don’t get sick,” I said. “They may go nuts at the least provocation, but they don’t get sick.” Air currents buffeted the small jet; I held on to the phone and the seat arm with white-knuckled grips. Inside me, Beast was purring, enjoying the ride entirely too much for a creature who used to be afraid of flying.

Static fuzzed the connection, but I made out the words “—two of these did. And maybe the third one, don’t know.” If Reach didn’t know something, it was better hidden than the identity of Kennedy’s killer—assuming that there really was a coven of blood-witches on the grassy knoll. Conspiracy theorists have a consensus on that, but there never was any evidence to back it up. “I’m still searching,” Reach said, “but it looks like the masters of the city of Sedona and Seattle are still showing signs of malaise. Boston’s MOC has vanished, and rumor has it the suckhead’s dead.”

Malaise, I thought, unamused, reading the description of their symptoms. It was a heck of a lot more than malaise. In spite of what I’d said, the vampires were sick—maybe dying. “Give me details.”

“According to my latest timeline, this vamp came out of nowhere two months ago and vamps started getting sick, which should be impossible, I know,” he agreed. “Once they were sick, they each got an ultimatum from an unknown vampire to swear him loyalty in a blood-ceremony, or face that master in a Blood Challenge, not something they could survive while sick. As soon as they swore allegiance to the new guy, the vamps got somewhat better. He didn’t kill them once he deposed them, but left them to run the cities as his loyal deputies. Each went from masters of independent strongholds to completely loyal subjects overnight. He’s successfully created a new power base and no one knows how he did it or who he is. Yet.”

“No vamp is loyal,” I said. “They’re all egocentric blood-sucking fiends.”

“True. But rich egocentric blood-sucking fiends, which is why we work for them.”

I grunted. I hated to think of myself that way, but he had a point. I’m Jane Yellowrock, and I used to kill vamps for a living. Until I started working for them. It wasn’t easy money, and I’d dumped the contract with Leo Pellissier, the chief fanghead of the Southeastern U.S., when the retainer ran out. But when Leo had requested my help yesterday, I’d re-upped to resolve this problem, because it was the right thing to do. Leo and his people had been attacked under my watch. Humans had been injured. Blood-servants had died. I’d killed some of them. No one knew who this new enemy was, and now vamps were sick, maybe dying, and a new, powerful vamp had entered the vampire political scene.

Reach continued to update me on two months of data and to answer a lot of questions. I’d need it. We’d touch down in Sedona in minutes, and assuming I got out alive, I’d be off to Seattle almost immediately. Listening to Reach’s matter-of-fact tone helped to keep my mind occupied and my heart out of my throat. Sorta.

“Okay,” I said. “And you’re—” Leo’s Learjet dropped several feet before leveling out. My mind went blank and I swallowed my dinner—again. “And you’re sure the attack on Leo in Asheville was this same guy who took over Sedona, and Seattle?”

My question wasn’t argumentative. The attack on Leo had happened before any of the others, and had been purely weapon-based, a frontal attack, no disease, no ultimatum, no nothing. I didn’t know what to make of the discrepancy. “If it’s the same vamp,” I said, “his attack on Leo falls completely outside his subsequent M.O. Of course, he did try to kick sand in Leo’s face, and Leo’s people busted his chops. Maybe when that happened he tried this new tack.” I hated guesswork.

The sound of leather squeaking reminded me to relax my grip on the seat arm. I took a breath, blew it out, and drank half a bottle of water to settle my stomach. Computer keys clacked in the cell’s background, sounding like a quartet of castanets as Reach—the best research and intel guy in the business—worked.

“I stopped believing in coincidence,” he said, “about ten seconds before I stopped believing in Santa Claus. It’s like this. Leo visits Asheville, is attacked in a hotel, and wins a gun battle. Within weeks of the attack on Pellissier, Lincoln Shaddock and three of his vamps in Asheville become ill with a brand-new vamp disease. Then Sedona gets sick, then Seattle, and now Boston. They got challenged, swore loyalty, and got better. Leo’s Asheville vamps are still sick, unlike in cities where the MOCs got sick, challenged and defeated, and then received treatment. Shaddock’s peeps are dying—as if it’s a punishment rather than a takeover tool.”

Which thought made me sit up in my chair. Vamps were big on sneak attacks and vengeance. This scenario made all kinds of sense. Shaddock was bound to Leo and an attack on Shaddock was, by extension, an attack on Leo.

Reach went on, “Yeah, it’s outside the attacking vamp’s modus operandi, but the symptoms of Lincoln’s peeps are exactly the same as those of the other masters of the city who fell through the looking glass.”

“Peeps,” I muttered. I knew those vamps. Among the sick ones was Dacy Mooney, Lincoln’s heir. The two were vicious killing machines. The fact that I sorta liked them may have said something not quite sane about me. “We only think the other vamps were treated. We don’t have empirical evidence,” I said.

“Yeah, yeah, yeah. But the disease is circumstantial evidence I’m willing to bet on. I think our BBV”—Big Bad Vamp, I thought with a smile—“started in Asheville with a frontal attack, and had to abandon his plans there when Leo’s people kicked his butt, and he left the disease as a punishment, a calling card, a warning, and a threat. The evidence you obtain in Sedona and Seattle will either confirm or deny that theory.”

“Ahhh,” I said. “That makes sense, which is why I pay you the big bucks.” The jet bumped up as if slapped high by a giant hand; then the bottom fell out. The small craft dropped what had to be a thousand feet before catching itself. On air. “Crap,” I whispered.

My things in an overhead compartment thumped around as gravity was again defeated. I wrenched my seat belt so tight it nearly cut me in two.

Inside me, my Beast huffed with amusement.

Beast is the soul of a mountain lion that I absorbed when I was a child and fighting for my life. It had been accidental, as much as black magic can ever be an accident. When I shifted, Beast’s was the form I most often took, and her thoughts and opinions counted nearly as much as my own. Fun, she thought. Like chasing rabbits in hills.

I slapped my brain back on, swallowed my dinner yet again, and focused. “Agreed,” I said, wishing I’d turned down this job. “But that theory still leaves questions. Why did the attacking master choose vamp strongholds so far apart on the map? Running three cities at a distance has to be a pain. Why not announce to the world who he is and what he’s doing? Every vamp I know is a megalomaniac and would publicize his conquest. This guy hasn’t.” And the newly subdued master vamps weren’t talking about what had happened on their turf or who their new master was—at all—which was another reason for this flight.

“The attacker is cheating, not challenging, according to the Vampira Carta,” Reach said.

I grunted again. The Vampira Carta and its codicils were the rule of law for the vamps—or Mithrans, as they liked to be called—and it contained laws and rules for proper behavior between vampires, their scions, blood-servants, blood-slaves, and cattle—meaning the humans they hunted. It provided proper protocols for everything, including challenging and killing each other in a duel called the Blood Challenge. The new vamp had challenged his conquests, but there had been no fights. None at all. And Boston, attacked a week ago, had gone off the grid. There had been no communication from that MOC in days. He was presumed to be true-dead.

Reach said, “If an unknown vamp is making a major power play, one that involves vamps getting sick, and Leonard Pellissier, Master of the City of New Orleans, is attacked, and then Leo’s scions get sick, it’s the same dude.”

“That isn’t quite ipso facto. It’s still more than half speculation.”

“Ipso facto? Janie knows her Latin. I’m sending you a folder on the vamp you’re visiting—the ex-master of Sedona. It’s put together from the files you loaned me to collate and organize.”