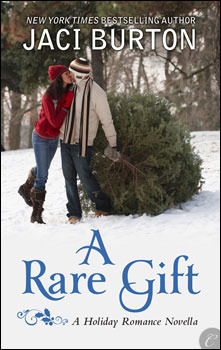 With a disastrous marriage behind him, Wyatt Kent has no interest in getting involved with any woman, let alone his ex-wife's younger sister. But when Calliope Andrews hires him to build an addition onto her day care center, Wyatt can't help but notice she's a desirable woman, as warm and funny as his ex was cold and aloof.

Calliope fell hard for Wyatt the first time he walked through the door of her family's home, and can't believe her sister let him get away. He's still the star of all her fantasies, and she's determined to prove to him she's nothing like his manipulative ex. Wyatt may be all business, but Calliope sees the way he looks at her when he's supposed to be working...

It's not long before Wyatt and Calliope are keeping each other warm on cold December nights. But it's going to take a Christmas miracle for Wyatt to put his trust in love a second time.