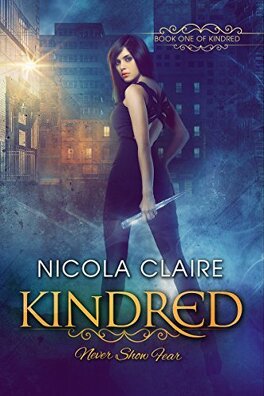 “You may not be aware, ma douce, but not all vampyre have a kindred, some will live out their existence without such beauty in their lives. I have waited five hundred years for you."

Vampires, shape shifters, ghouls and magic users abound in a world where the Norms, (those humans without paranormal abilities) are ignorant of the creatures of the night and the supernatural species that live alongside them.

Lucinda Monk is a bank teller by day and a vampire hunter by night, but she wasn’t always a part of this world. Thrown into a heady mix of powerful people and sensual beings, she’s had to find her way practically blindfolded in amongst the creatures of the night. But she’s a capable and realistic kind of girl. Her motto: never show fear. But, there's something different about Lucinda, something those creatures she hunts, want. In order to stay one step ahead of the enemy she has to let the enemy in. In all his compelling, seductive and delicious ways. Sleeping with the enemy has never meant so much before. But, can she trust him?

From the urban streets of the city, to the dark alleys and sinful bars that promise a wickedness a girl from the farm has never before been exposed to, Lucinda gets drawn irreversibly into the dark side of life. And if the Master of the City had his way, she would always be his. For eternity

I knew things weren't quite going according to plan when his fist connected with my jaw. The pain sent a sharp stab up through my skull, making me grit my teeth, hear bells ringing in my head and my vision begin to blur. But, for the life of me, I could not understand why. Never one to dwell too long on the morose, I decided the best course of action was to come out guns blazing. As I don't actually own a gun, I settled on a taunt instead.

“Is that the best you've got?” I managed to squeeze out between my still clenched teeth. I shouldn't really be antagonising the nasty stinking creep in front of me, especially as I was still down on all fours spitting blood out of the side of my mouth, but I just can't help it. Call me a sucker for punishment, it's just how I work. Never let them see fear, that's my motto. So far, it's kind of worked.

Not so sure about that today though.

“Oh sweet Hunter, you think your witty repartee will distract me?”

Huh? Why do all the bad guys sound so freakishly prim and proper all of a sudden. Where's the good old, take that you bitch gone? I don't know about you, but I kind of like the simplicity of an evil bad guy dropping his h's and missing his t's. It just goes with the territory, ya know wot' I mean, luv?

And here comes the foot again, straight into my rib cage. I heard the crack this time, it sounded like a gun shot in the alley we were in. It reverberated around the brick walls on either side, or was that just inside my head? I couldn't tell, but breathing was suddenly a challenge. Oh God though, it hurt. And how did this upstart get the drop on me? I mean it all seemed so easy.

There he was, down the far end of the dark alley, against a dirty brick wall, like all good evil vampires should be, with his arm casually about the blonde's shoulders, looking into her eyes and mind fucking her, fangs down and glow on. It should have been a walk in the park, he was distracted, about to get his fill, no where to run, but somehow here I am on the ground struggling to inhale and there he is with a cocky grimace and the upper hand. What the?

“They told me you were stronger than this, more clever too. Hmm, I guess they were wrong, my sweet. You are nothing but a little girl, playing Buffy the Vampire Slayer. Where is the big bad Hunter I have heard so much about, hmm? Where indeed.”

Where indeed sweetie? That's just what I was thinking. Not trying to be egotistical or anything, but usually my hunts go a hell of a lot better than this. And usually I don't have to battle more than one blood thirsty vampire in a night. This, however, is the third numbskull vamp to cross my path trying to feed off the innocent. I'd have to ask Michel about this influx of careless vampires, eating in such a public way, disregarding all of his rules when entering his city.