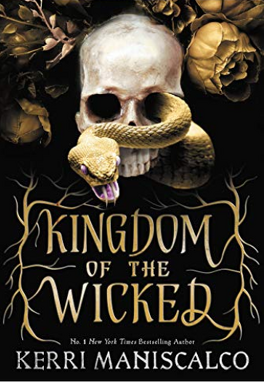 Kingdom of the Wicked, Tome 1

Wrath was still for a beat before he met my lips with equal hunger. His hands slid down to my hips, anchoring me in place. It wasn’t nearly close enough. I pressed myself against him. He was gentle at first, then I swept my tongue into his mouth and he came undone. He kissed me back hard, then his teeth were against my throat—in the exact spot he’d flicked his tongue over the night he’d used that spell to bring me back from the edge of death. I hadn’t been sure it had actually happened, now I knew it had. For one startling moment, I imagined him ripping out my throat. The fear quickly passed and was replaced by pure desire. I gasped from the unexpected sensation. I swore I felt the strange heat from that first encounter simmering beneath my skin now. I wanted him to devour me. Or maybe I wished to devour him. I hated how good he felt. How right. I’d kissed boys before—drunkenly and on dares. Chaste kisses and passionate kisses, but none that were like this. Powerful. Savage. Sweet. A reckoning awoke in me. The more I gave, the more he returned. We traded kisses like blows. And if this were a fight, I wouldn’t know who was winning. I understood why some thought kissing one of the Wicked was addictive. Each time his tongue touched mine, it felt as if the ground beneath me quaked. Like we were a cataclysmic event that shouldn’t be. It only made me kiss him harder, faster. I tugged at his shirt, wanting it off. I wanted nothing between us. Buttons hit the ground as I yanked at the material. I dragged my fingers down the ridges of his hard stomach. His hands on my body felt like magic. It was more intense, more seductive than any spell. Somehow, we were now up against a column. I don’t remember moving. Maybe because all I could concentrate on was the way he was currently moving against me, hoisting me up. I wanted to rip off the rest of his clothes and see what else he could do. Discover what other feelings he could awaken in me. His hand slid down to my calf, then trailed up slowly, pulling my skirts with it. He didn’t stop, and I didn’t want him to. I tipped my head back, giving him access to my throat again as he paused with his hand on my thigh. I leaned in to his touch, wanting him so badly I was almost driven to madness.

Fear made monsters of men.

“There are victors and victims. Decide who you want to be. Or the choice will be made for you, witch. And I doubt you’ll like it.”

I threw my head back and groaned.

“It’s a game of scopa, not a battle between life and death. Are you always this dramatic?”

Wrath scowled from behind his hand-painted cards.

“Valuable lessons are often learned from games of strategy. Only fools discredit them.”

“And only an ornery creature from Hell gets this serious over a simple card game.”

“We should go back to the palace, and speak there.”

“Not until you give me some answers.”

Wrath looked like he was considering different ways to string me up using my innards.

“Now.” I refused to budge on this.

He stared up at the sky and I wondered, if he was praying, why he hadn’t glanced down instead.

I looked down at my new, finely made dress and frowned at the dark layers.

“Why do villains always wear black?”

“Better to hide the blood with, witch.”

I eyed the demon standing in the alley next to me, thinking his response explained a lot about his personal style. Then I wondered how much blood he planned to spill tonight if he’d dressed us both like living, breathing shadows. I was almost disturbed the thought didn’t terrify me more.

“All right. It’s time,” Wrath said, straightening. “If you’d prefer to stay here, then stay. I don’t coddle.” I ignored him and slipped into the shadows, letting him talk to himself. He seemed to enjoy the sound of his own voice well enough. It felt rude to interrupt. “I won’t comfort. Or tend to your wounds. Emotional or otherwise. I despise—” When the door across the alley creaked open, his mouth snapped shut. I flashed him a scathing look as I pushed it wider in invitation. He stood there, scowling. I’d wager anything he hadn’t heard me move. I wondered how many people ever surprised him. Probably not many, given the way his annoyance seemed to build at the thought of being bested by a witch. “Are you coming, or not, demon?”

A metallic snake inked onto an arm banded around my body—not in possession, but solidarity. Like Wrath had followed me into my nightmare, battled Death, and dragged me out. At some point, I thought his tongue flicked over my jugular, tracing an invisible S along my skin. I remembered the feeling of every nerve ending, every molecule sizzling, instantly attuned to where I wanted those lips to move next. I swore I still felt heat lingering from the brief contact. I was surprised that I didn’t hate it.

It sounded like he whispered, “Live long enough to hate me for this.”

I pulled a cannoli from the brown paper bag I’d tucked into my satchel. Nonna said you could catch more flies with honey than vinegar. I figured a cannoli would help me catch a prince of Hell just fine. He looked startled when I handed it to him.

“Food. Unless you’ve been catching vermin, I doubt you’ve eaten.”

“I neither need human food, nor do I wish to taint my body with the foulness of it.”

I stared at him, horrified. After all the terrible things that had happened, this was putting me over the edge.

“You really are a monster, aren’t you?”

“That doesn’t even look edible.” He took the cannoli between his two fingers and held it closer to inspect it. “What do you expect me to do with it?”

He poked at the ricotta filling. “Is it poisoned?” I sighed.

“Just eat it, oh, mighty warrior. It’s for pleasure, not pain. I made them myself. I swear they’re not poisoned. This time.”

He looked skeptical, but took a bite. His attention flicked to mine as he chewed. I couldn’t help but grin as he took a larger mouthful, then grabbed a second cannoli from the bag. He was halfway through it when he noticed me still watching and scowled.

“I do not wish to taint my body with the foulness of human food,” I mocked. “But desserts are acceptable.”

He didn’t deign to respond. Instead he rummaged in the bag, frowning at the emptiness.