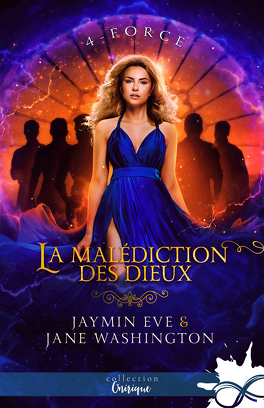 “YOU CAN’T JUST LEAVE,” one of the girls screeched, forcing our group to halt and our heads to turn.

It was the Trickery sol: her purple hair almost seeming to stand on end in agitation.

“We aren’t learning anything,” she spat, the others fanning out behind her. “This is bullsen shit. You five are supposed to be helping us become better, but you’re too busy babysitting this dweller slut—”

My hand was suddenly before my face, my palm facing out, and power was surging down my arm. Maybe it was the stress over my mother, or the possibility that Staviti might have followed us out of Topia—that he might have allowed us to take the chains into Minatsol only to sneak after us and steal them back. Or maybe I just didn’t like being called a ‘dweller slut’. Whatever the reason, my power was suddenly exploding into the world, and it was too late for me to stop it. The Trickery sol was bent over, her hands covering her face, a scream floating back to where I stood.

I rushed over to her, guilt flooding into me and snapping my energy back into my body with a heavy pull that had my head spinning. My legs were shaking as I bent beside her, my hand on her shoulder. She flinched away from me, and the Seduction and Strength sols crouched beside her, drawing her back from me.

“I’m sorry.” I tried to get close again, but the Trickery sol kicked out at me.

“Stay the fuck away from me!” she shouted, though her voice was strangely muffled.

“I don’t even know what I did,” I pleaded, searching her body for scorch marks, or any sign of fire damage.

She lowered her hands from her face, revealing two blood-shot eyes and a ...

“Well … I did not expect that.” Siret was behind me, his voice somewhat amused.

“You ... oh.” That had come from Rome, also sounding amused and a little horrified.

I swallowed, torn between an absurd urge to laugh, and an even stronger urge to cry. A strangely manic emotion was trickling through me—possibly a result of the sudden rush of power and adrenaline, but just as likely a result of the absurd vision before me.

There she stood: purple-haired, red-eyed, with a penis protruding from her forehead. A real, live penis.

“How do you know it’s alive?” Siret was really enjoying this moment. I could already tell I’d improved his sun-cycle immensely with my ability to make a literal dickhead.

“I don’t know!” I exclaimed. I was squinting at it, trying to see if I recognised it.

I was hoping that it didn’t look like it belonged to any of my guys. It was too small to be Rome’s, and it wasn’t anywhere near as nice-looking as Siret’s or Yael’s.

“WHAT HAVE YOU DONE?” the Trickery sol screamed, her hands darting up towards the thing dangling from her face.

Every single one of us flinched.

“Oh gods.” The Strength sol had her hand over her mouth. She looked a little sick. “Please stop touching it.”

“Why?” The Trickery sol was growing pale, her eyes widening in panic. “Is it doing something?”

“It’s not doing anything,” I assured her, even though I was actually avoiding looking directly at it. “But still probably don’t touch it. You might get pregnant ... and I think that would make me the father of your baby.”