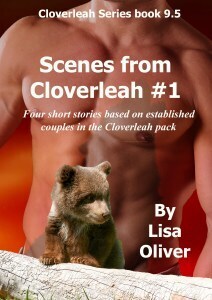 Four Short Stories in the one book :

This is NOT a standalone.

There have been a lot of things going on in the Cloverleah pack, and if you have been following the series, you will know there were a couple of things that happened that didn’t quite make it in the story line. These four short stories are my way of filling in those gaps.

Griff and Diablo: Our two men have finally got the chance of a three-day break before they are due to get married in New York. Diablo wants Griff to meet his mom, but they’d only been there long enough for lunch, and Diablo starts to think he’s made a huge mistake.

Josh and Vadim’s wedding had Josh crying in the aisle, but Vadim’s the planning expert and he has a wonderful holiday planned for his mate. Unfortunately, it seems Vadim can’t go anywhere without his past coming to haunt him, and this time Josh is under threat.

KANE AND SHAWN: THE IMPORTANCE OF HOPE

Shawn knows Kane has a bee in his bonnet about something; he just doesn’t know what it is. It’s time for some serious talking, and maybe, just maybe these two men will find a sliver of hope among the darkness that’s been surrounding Cloverleah.

Kurt, Luke and Tobias: Tobias always said that once the pack was safe he was more than happy to entertain the idea of having children. But the Fates had another plan in mind and when a baby cub rescued from Roland’s lab has trouble settling in with the San Antonio pack, Luke makes a plea that can’t be ignored.

If you want to know the back story for these characters, the titles are below:

Griff and Diablo – The Runaway Cat

Josh and Vadim – Watching Out for Fangs

Kane and Shawn – The Reluctant Wolf