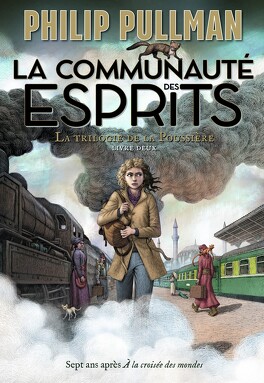 ‘It used to be you who was impulsive,’ said Pan, ‘and me who kept holding you back. We’re different now.’

She nodded. ‘Well, you know, things change … This isn’t just shoplifting. This is murder.’

‘And maybe by doing this we’d be helping the murderer get away with it. By interfering with the investigation. That can’t be right.’

‘That’s another thing,’ he said.

She knew he was right, but it wasn’t right that he should speak to her accusingly, as if it was something to blame her for.

‘I used to be young,’ was all she could find to say.

He made no response.

They didn’t speak again till they reached the station. Then she said ‘Pan, come here,’ and he leapt up at once into her hands. She put him on her shoulder and said quietly, ‘You’re going to have to look out behind. Someone might be watching.’

He was conscious of his own ox-like clumsiness. He was conscious of all kinds of constrats - his maturity and her youth, his bulk and her slenderness, his stolidity and her quickness... He could watch her for hours. Her eyes, large and long-lashed and a gloriously vivid blue, more expressive than anyone's he'd known; she was so young, but already he could see where the laughter lines, the lines of sympathy, the lines of concentration would gather in the years to come and make her face even richer and more full of life. Already, on each side of her mouth, there was a tiny crease made by the smile that seemed to hover just under the surface, ready to flower into being. Her hair, dark straw-coloured, shortish and untydish but always soft and shining: once or twice when he was teaching her, bending to look over her shoulder at a piece of written work, he'd caught a faint scent from the hair, not of shampoo but of young warm girl, and drawn away at once. At that time, when they were teacher and pupil, anything like that was so wrong his mind shut it down out before it had even fully formed.

But four years later, was it still wrong to think about it? About Lyra now? Wrong to yearn to put his hands on either side of her face, on those warm cheeks, and bring it gently towards his?

He'd been in love before; he knew what was happening to him. But the girls and women he'd loved in the past had been roughly his own age. Mostly. In the one exception, the difference was the other way. Nothing he knew was any help in this situation, and she was in such danger and difficulty at the moment that bothering her with his own feelings would be unforgivable. But there it was. He, Malcolm Polstead, aged thirty-one, was in love with her. It was impossible to think that she could ever love him.