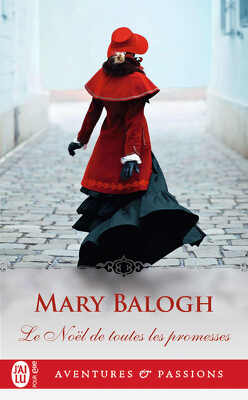 A love that cannot be bought or sold proves to be the greatest gift of all, in this heartwarming classic that demonstrates once again why New York Times bestselling author Mary Balogh is among the most celebrated authors of historical romance.

Weddings are supposed to be joyous occasions—especially when a couple seems as well matched as Randolph Pierce, Earl of Falloden, and his bride-to-be, Eleanor Transome. Ellie brings to the marriage a vast dowry, while Falloden, though distant, is handsome, tremendously desirable, and possessed of a title most young ladies can only dream of sharing.

Yet Ellie is not most young ladies. She knows that she must honor her dear father’s dying wish for her to wed the proud earl, but she dreads a lifetime in a union without love—and how can Falloden claim to love her when he married her only for her fortune? As Christmas descends upon the Falloden manor, the warmth of the season may yet melt away the trappings of duty and wealth, leaving behind only a man and a woman destined for each other’s arms.

Eleanor Transome found her father's wealth a dubious blessing, for he was determined that she wed a nobleman. Lord Randolph Falloden, on the brink of ruin, could not resist the lure of cold cash, despite his passionate alliances with several other desirable maidens. And though her heart belonged to the handsome, if humble, Mr. Wilfred Ellis, Eleanor would never deny her father's wishes. Thus the match was made--with love not part of the bargain--for the arrogant earl and the coal merchant's proud daughter. But in this season of unexpected gifts, a most remarkable surprise was in store for them both....