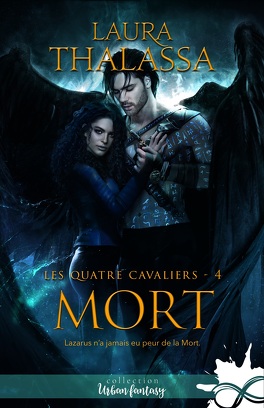 Death cups my face, and his nostrils flare. “Tell me you don’t feel this … this consuming need.”

My stomach somersaults at the intensity in his eyes.

“I don’t feel it,” I say, only my voice comes out all breathy and wrong.

Thanatos narrows his gaze even as he smiles.

“I will count to a thousand,” he says. “That’s as generous as I’m going to be. You can do whatever you’d like in those thousand seconds. I won’t fight back, I won’t come after you, but once time’s up, we’ll no longer be playing your game. We’ll be playing mine.”

We were never playing any sort of game. Ever.

My stomach drops. “I’m not going to—”

I look breathlessly at him, then around at us. I’m half-convinced this is all a dream, but that doesn’t stop me from jumping into action.

I slide my satchel off my shoulder, letting it drop to the ground. Kneeling down next to it, I pull out a knife and begin sawing away at the strap of the bag. Once I cut the strap free, I glance at the horseman.

He raises his eyebrows. “Sixty-seven … sixty-eight …”

“Turn around,” I command, half-expecting him to ignore my demands. Much to my shock, however, he turns, exposing his massive wings to me.

My breath hitches at the sight of all those coal-black feathers. I step up to his back, my skin pebbling as those very feathers brush against my skin. I swear I hear Thanatos’s sharp inhale, and maybe I’m not the only one affected by the contact.

I grab one of his forearms, pulling it behind his back, then the other, pressing his wrists together. I bind his hands together with the satchel’s leather strap, making sure to tie the knots extra tight. His body sways.

“I like this, kismet,” he says, “This makes me think very strange, very … human thoughts about you.”

My core clenches at his words.

I tug on the final knot extra hard. “Why don’t you focus on counting—wouldn’t want to give me any extra time,” I say, stepping away.

Death laughs darkly, the sound making the hair at the nape of my neck stand on end.

“You’re not going anywhere,” he vows.

My stomach dips at the certainty in his voice.

“Turn around,” I command.

Again, I don’t expect him to follow my words, but he does. The horseman faces me once more, his eyes full of dark anticipation.

He smirks. “What about my wings?” he asks. “Shall you bind them too? Or will you simply pierce them with your knives?”

I pull out one of the blades in question. Rather than turning it on his wings, however, I cut off the bottom of my shirt.

Gripping the fabric, I step up to him.

He stares down at me for a long time, that same look in his eyes. Never glancing away, he moves down on one knee, then both.

I bring the cloth up to his eyes, blindfolding him with it.

“Killing me would be easier,” he says.

It would be. I have to hide my swallow.

I tie the knot extra tight behind his head, ignoring his beautiful features and the silky soft texture of his dark hair. I can’t help, however, the strange sensations the scent of him conjures.

Him holding me fast to his chest, his fingers in my hair …

“Come with me,” Death says softly. His voice is gentle, a plea; it’s so unlike him. “Untie these bindings and come to me of your own free will.”

“You said you wouldn’t ask me that again,” I remind him.

“I was wrong,” he says. “Come with me, Lazarus. Let me know what it is like to hold you instead of fighting you.”

A slow, malevolent smile spreads across his face, and even blindfolded, I find him chilling.

“Then you better run, kismet.”