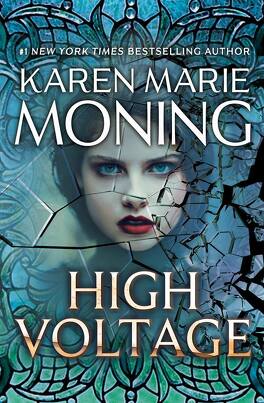 There is no action without consequence…

Dani O’Malley was nine years old when the delusional, sadistic Rowena transformed her into a ruthless killer. Years later, she’s tough, hardened, yet achingly vulnerable and fiercely compassionate, living alone by her own exacting code. Despite the scars on her body, driven by deeper ones carved into her soul, no one is more committed to protecting Dublin. By day, she ensures the safety of those she rescues, by night she hunts evil, dispensing justice swiftly and without mercy, determined to give those she cares for the peace she has never known.

There is no power without price…

When the Faerie Queen used the dangerously powerful Song of Making to heal the world from the damage done by the Hoar Frost King, catastrophic magic seeped deep into the earth, giving rise to horrifying, unforeseen consequences–and now deadly enemies plot in the darkness, preparing to enslave the human race and unleash an ancient reign of hell on Earth.

There is no future without sacrifice…

With the lethal, immortal Ryodan at her side, armed with the epic Sword of Light, Dani once again battles to save the world but her past comes back to haunt her with a vengeance, demanding an unspeakable price for the power she needs to save the human race and no one—not even Ryodan who’d move the very stars for her—can save her this time…

I thought I’d say that first so I didn’t start right off with an ominous cliché like: If you’re reading this, I’m dead. But if you are, I am. Don’t worry about me, I’m fine and we’ll see each other again.

I wanted to leave you a letter but I couldn’t think of a place to leave it that A: you wouldn’t find it before I was dead, and B: you’d definitely find it after I was and, honestly, I didn’t want you to have it right away, so I asked Mac to give it to you when the time seemed right. I know my death will hit you hard, and I’m so bloody sorry about that.

I’ve suspected for a while the cosmic clock is winding down for me. I know the signs. You know them, too, and I love you to the ends of the earth and back again for ignoring them with me. That took more than courage, Mega. That took a heart of gold and a backbone of steel.

I used to worry that I’d never get to hold you and make love to you in this lifetime. That our red thread was going to have to be a platonic one because you were so young when we met and I had an impaired heart, and it drove me crazy because I knew we’d loved each other before. I knew it the moment I saw you, spitting “fecks” a million miles a minute, feeling everything in life so intensely.

So anyway, I printed out the myth for you, in case the world stays offline, but in brief, the Japanese believe our relationships are predestined by gods who tie together the pinky fingers of those who are supposed to find each other in life. People connected by red threads will have a profound impact on one another, life-changing, soul-shaping impact. They’ll make history together. Although those threads can get tangled, knotted, and snarled, they’re unbreakable. (As an aside, I think it’s best not to take the “unbreakable” part for granted. Choice is paramount. Red threads are sacred. Be gentle with them.) (As another aside, those red threads shoot out from our pinky fingers because the ulnar artery runs from the heart to the little finger and those threads are there to keep our hearts connected, across space and time.)

Thank you for being my red thread. I know how damned lucky I was to get you.

I know you, wild thing. Much better than you think. You thought I loved you because I only saw the good parts of you. You thought I saw you through a filter. I didn’t.

I know about the cage (I hate her for that more than you can know), the killing you were tricked into doing (I hate Rowena, too), the terrible injustices you suffered.

Yet, you came out of it with a heart so pure it takes my breath away. If I could, I’d have saved you a thousand times over. I’d have been your knight in shining armor. I’d have slayed dragons, rescued you, fought wars for you.

But no one saved you. So you save the world.

And now I’m dead and I left you alone and I hate that.

You remember when I asked you about Ryodan? You got mad at me when I said I wasn’t as super as him. You said that I was just as super, just not in the same ways. Thank you for saying that.

I view you the way you view Ryodan. I worship you. I’m in awe of you. I think you’re the most amazing person I’ve ever known.

I envied Ryodan. His strong heart, his immortal body. I envied his long life so much I nearly hated him.

Then one day he came to me, after you told him I was dying. He told me about you. The things you never let me know. He didn’t tell me everything, so don’t get mad at him. I know because I asked questions he wouldn’t answer. He wanted me to know what a miracle you are. He was also taking my measure, trying to decide if I was worthy of you. My respect and esteem for you grew even greater that day, and I hadn’t thought it possible. You’re a one in a googolplex kind of woman, Mega.

Before he left, he offered to get me the Elixir of Life.

When I said no, he offered to make me like him.

I dropped the letter and sat staring blankly. He’d done what? I’d asked him to do that very thing. He’d said no, it wouldn’t work, it might kill him. Then he’d gone to Dancer and offered to do it anyway. For me. I spent several long moments trying to process that, then resumed reading.

He said it wasn’t a guaranteed success, my heart might blow anyway. I might not survive the transformation. But because you loved me, he would try. He said neither the elixir nor becoming like him was without price, both came accompanied by significant problems. He said he would tell me those problems if I chose one of the options.

I’ve never been so tempted in my life.

But there’s a pattern and purpose to all things. I see it in the sublime truth of math, I hear it in the perfection of great musical compositions. This spectacular universe knows what it’s doing.

He also told me the definition of love you gave him when you were fourteen—great one, by the way!—but said you’d missed something.

He said love is the willingness to put the happiness and evolution of the person you love before your own. Even if it means giving them up.

Time for brutal truth: I always knew you wanted us both. Stop sweating it, wild thing. I’m only one of the many twists and turns of your evolution.

I’m getting tired now. It won’t be long. I want to rest so I can make love to you again tonight when you get home. The way you look at me in bed, with all that fierce emotion blazing from your eyes, the way you touch me—you’re not big on words but I feel it in your hands—and, because of you, I’ve gotten to be the man I always wanted to be in this lifetime.

Dani, my bodacious, magnificent red thread, you rocked my fucking world, you rattled my existence, you woke me up to shades of life I’d never seen before.

I think sometimes we don’t get to see our red threads for a dozen or more lifetimes. I hope other times we get a hundred lives together, back to back. I can’t wait for the chance to love you again.

But it’s not my turn now.

That privilege belongs to someone else.