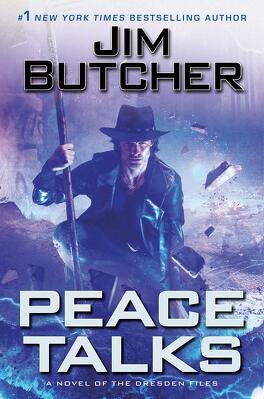 When the Supernatural nations of the world meet up to negotiate an end to ongoing hostilities, Harry Dresden, Chicago's only professional wizard, joins the White Council's security team to make sure the talks stay civil. But can he succeed, when dark political manipulations threaten the very existence of Chicago—and all he holds dear?

I thought of the hideous scarlet light of the Eye, tearing through Marcone’s little fortress.

“What do you mean?” she asked.

“It’s too big,” I said. “This isn’t a war-torn nation where it can be explained away. Or an odd-duck private investigator with a quirky shtick. It’s Chicago. Ethniu and King Corb aren’t even trying to keep this quiet. The kind of blood that’s going to be spilled … It will cry out.”

“People will be terrified,” Murphy said.

“And they’ll set out to destroy what frightens them,” I said. “It’ll make the Spanish Inquisition look like a bouncy castle.”

Murphy shuddered. “If Ethniu and Corb pull this off, they’ll set the mortal world and the supernatural world at war.”

I stared ahead at the dim skyline of my city, ghostly in the darkness.

And I gave the old boat all it had.