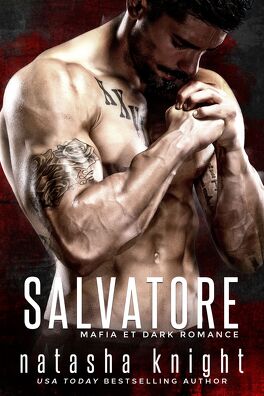 I signed the contract before me, pressing so hard that the track of my signature left a groove on the sheet of paper. I set the pen down and slid the pages across the table to her.

I could barely meet her gaze as she raised big, innocent, frightened eyes to mine.

She looked at it, at the collected, official documents that would bind her to me. That would make her mine. I wasn’t sure if she was reading or simply staring, trying to make sense of what had just happened. What had been decided for her. For both of us.

She turned reddened eyes to her father. I didn’t miss the questions I saw inside them. The plea. The disbelief.

But DeMarco kept his eyes lowered, his head bent in defeat. He couldn’t look at his daughter, not after what he’d been made to watch.

I understood that, and I hated my own father more for making him do it.

Lucia sucked in a ragged breath. Could everyone hear it or just me? I saw the rapid pulse beating in her neck. Her hand trembled when she picked up the pen. She met my gaze once more. One final plea? I watched her struggle against the tears that threatened to spill on her already stained cheeks.

My father’s command made her turn. I watched their gazes collide.

To call him domineering was an understatement. He was someone who made grown men tremble.

But she didn’t shy away.

She didn’t look at anyone after that. Instead, she put pen to paper and signed her name—Lucia Annalisa DeMarco—on the dotted line adjacent to mine. My family’s attorney applied the seal to the sheets as soon as she finished, quickly taking them and leaving the room.

I guess it was all official, then. Decided. Done.

My father stood, gave me his signature look of displeasure, and walked out of the room. Two of his men followed.

“Do you need a minute?” I asked her. Did she want to say good-bye to her father?

She refused to look at him or at me. Instead, she pushed her chair back and stood, the now-wrinkled white skirt falling over her thighs. She fisted her hands at her sides.

I rose and gestured to one of the waiting men. She walked ahead of him as if he walked her to her execution. I glanced at her father, then at the cold examining table with the leather restraints now hanging open, useless, their victim released. The image of what had happened there just moments earlier shamed me.

But it could have been so much worse for her.

It could have gone the way my father wanted. His cruelty knew no bounds.

She had me to thank for saving her from that.

So why did I still feel like a monster? A beast? A pathetic, spineless puppet?

I owned Lucia DeMarco, but the thought only made me sick. She was the token, the living, breathing trophy of my family’s triumph over hers.

I walked out of the room and rode the elevator down to the lobby, emptying my eyes of emotion. That was one thing I did well.

I walked out onto the stifling, noisy Manhattan sidewalk and climbed into the backseat of my waiting car. The driver knew where to take me, and twenty minutes later, I walked into the whorehouse, to a room in the back, the image of Lucia lying on that examining table, bound, struggling, her face turned away as the doctor probed her before declaring her intact, burned into my memory forever.

I’d stood beside her. I hadn’t looked. Did that absolve me? Surely that meant something?

But why was my cock hard, then?

She’d cried quietly. I’d watched her tears slip off her face and fall to the floor and willed myself to be anywhere but there. Willed myself not to hear the sounds, my father’s degrading words, her quiet breaths as she struggled to remain silent.

All while I’d stood by.

I was a coward. A monster. Because when I did finally meet those burning amber eyes, when I dared shift my gaze to hers, our eyes had locked, and I saw the quiet plea inside them. A silent cry for help.

In desperation, she’d sought my help.

And I’d looked away.

Her father’s face had gone white when he’d realized the full cost he’d agreed to; the payment of the debt he’d set upon her shoulders.

Her life for his. For all of theirs.

Fucking selfish bastard didn’t deserve to live. He should have died to protect her. He should never—ever—have allowed this to happen.

I sucked in a breath, heavy and wet, drowning me.

I poured myself a drink, slammed it back, and repeated. Whiskey was good. Whiskey dulled the scene replaying in my head. But it did nothing to wipe out the image of her eyes on mine. Her terrified, desperate eyes.

I threw the glass, smashing it in the corner. One of the whores came to me, knelt between my spread legs, and took my cock out of my pants. Her lips moved, saying something I didn’t hear over the war raging inside my head, and fucked up as fucked up can be, she took my already hard cock into her mouth.

I gripped a handful of the bitch’s hair and closed my eyes, letting her do her work, taking me deep into her throat. But I didn’t want gentle, not now. I needed more. I stood, squeezed my eyes shut against the image of Lucia on that table, and fucked the whore’s face until she choked and tears streamed down her cheeks. Until I finally came, emptying down her throat, the sexual release, like the whiskey, gave me nothing. There wasn’t enough sex or alcohol in the world to burn that particular image of Lucia out of my mind, but maybe I deserved it. Deserved the guilt. I should man up and own it. I allowed it all to happen, after all. I stood by and did nothing.

And now, she was mine, and I was hers.

Her very own monster.