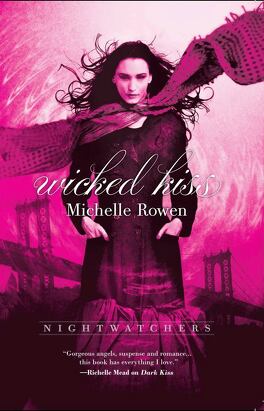 MY KISS CAN KILL.

I used to be ordinary Samantha Day, but that's changed. Now, after one dark kiss from a dangerous boy, I can steal someone's soul...or their life. If I give in to the constant hunger inside me, I hurt anyone I kiss. If I don't...I hurt myself.

Bishop is the one whose kiss I crave most, but if I kiss him, I'll kill him. Then there's another boy, one I can't hurt. One whose kiss seems to miraculously quell my hunger. They're both part of a team of angels and demons that's joined forces in my city to fight a mysterious rising darkness, an evil that threatens everyone I know and love. I just wonder if I'll be able to help Bishop-or if I'm just another part of the darkness he's sworn to destroy....

When angels and demons must work together, something beyond evil is rising...

I tried to pull away from him, to shove against his chest as hard as I could.

But it was too late. The hunger that had swirled around me the entire time I’d been at Crave, which had intensified to an impossible to ignore level when Bishop was close to me, that waited patiently while Colin blurted out what was on his mind—

The pounding dance music muted. The sparkling lights faded. The club disappeared. My rational thinking ceased. And my hunger took over.

This wasn’t a kiss with a drunk boy who liked me and was mad I didn’t like him in return. This was about feeding—that part of me that was missing a soul and was constantly trying to devour everyone else’s.

It was what I feared the most. I didn’t want to hurt anyone. But that was exactly what I was doing.

Feeding on Colin was so natural for me. In this mindless state, it was the most natural thing in the world—neither good nor bad. And with every bit of his soul I devoured, delicious warmth spread through me, chasing the horrible, endless cold away. My thoughts about hurting him vanished. I would feed until I was satisfied, and since I’d barely ever fed before, that would take a long time.

Someone grabbed my upper arm and painfully wrenched me away from Colin. Colin staggered back and dropped down into a nearby booth. Thin, black lines branched around his mouth and his skin was sickly pale. His eyes were glazed. His chest moved rapidly as he gasped for breath.

Haven’t taken it all. Just a piece…

The grip on my arm tightened and I turned to see that it was Kraven now in front of me, shaking his head.

“Let go of me!” I was working on instinct only, still possessed by the hunger. I stared at Colin. “I need more.”

“You need more?” Kraven grabbed my chin and forced me to look at him instead of Colin. “Try this.”

He kissed me hard, releasing my arm to slide his hands into my long hair. I automatically tried to feed, but there was nothing there. Regular demons like Kraven didn’t have souls. This was the proof. With no soul to feed from, this was just a kiss.

And yet, strangely enough, it still seemed to satisfy me. I wasn’t feeding, but my hunger began to ease a fraction at a time.

But then the kiss stopped. Abruptly.

“What the hell are you doing to her?” Bishop snarled.

He grabbed hold of Kraven and wrenched him away from me, slamming the demon hard against the wall.

Bishop’s eyes blazed bright blue. They did that sometimes. He’d told me it was a bit of celestial energy that rose up when he got emotional. Based on the current neon brightness, he was very emotional.

My head continued to clear, although not as rapidly as I’d have liked it to. I staggered back from them and landed in the booth across from the slowly recovering Colin. A quick sweep of the club showed that nobody was paying us any attention.

Neat trick that demons and angels had—they could cloak an area to gain a little privacy when problems arose.

Kraven shoved Bishop back from him. “Sorry, but your little girlfriend was in need of some help.”

“That was you helping?”

I sent a look at Colin. My mind had now cleared completely and my control was back. Guilt and horror slammed through me at what I’d done. The black lines around Colin’s mouth had faded completely, but his eyes were still glazed. A gray’s victim seemed to go into a short-term trance while they were being fed upon. Since I’d experienced it from the victim’s side, I knew that it felt way better than it looked. Exciting, exhilarating, amazing—just like a good kiss should be.

But there was nothing good about this kiss. If I’d successfully taken all of Colin’s soul, I could have killed him. Or, if he was strong enough to survive it, he would become another gray, capable of hurting others.

Either thought scared the hell out of me.

My gaze shot to Bishop. “Colin kissed me. I—I’m sorry. I couldn’t help myself after that.”

Colin shook his head as if to clear it. He glanced at me, and then at the two tall boys staring at him.

“How do you feel?” Bishop asked him.

He scrubbed his hand over his forehead. “Um, okay, I think. What happened?”

Bishop grabbed the front of his shirt and yanked him out of the booth. “Don’t kiss her again. Ever. You hear me?”

Colin gaped at him. “Who are you?”

Bishop let him go and Colin staggered back, then glanced at me as if waiting for me to defend him. Instead, I forced myself to look down at my hands, which I’d clasped in my lap.

Without any further argument, he slunk away from us and was swallowed by the rest of the crowded club.

“Your girlfriend’s a great kisser,” Kraven said drily. “Her tongue is like…wow. She doesn’t hold back. You’re really missing out with that pesky soul of yours.”

Bishop turned on the demon, his eyes flashing. “Stay away from Samantha or I’ll kill you.”

“This is the thanks I get for saving the day? She was going to suck that kid dry right here in the middle of the club. Besides, why are you mad at me? I think some of that angel attitude should be pointed in her direction. Or can gray-girl do no wrong in your eyes, even when she slips up? Or slips someone else the tongue?”

Bishop’s expression didn’t lose a fraction of its fury. “I think you do want me to kill you. Is that your goal?”

Kraven gave him a humorless smile. “Don’t know. How many times can one brother kill the other? Are you looking for some kind of Guinness World Record here?”

Kraven liked to mess with the minds of others, but I wasn’t in the mood for it now. He wasn’t helping anything by baiting Bishop like this.

He finally spared a look in my direction. “Please. You should be thanking me for saving your pretty little ass a minute ago. Instead, I get vilified. Whether either of you wants to admit it or not, the kiss worked. It snapped you out of your monster madness.”

Bishop’s brows drew together as if he was considering this possibility. His gaze then hardened. “We’re leaving.”

I’d wanted to come here tonight so I could find some answers. I’d honestly thought I was in control of myself and my hunger.

But I’d hurt Colin, and if Kraven hadn’t stopped me I could have killed him.

“I’m sorry,” I whispered to Bishop as I pushed myself up from the booth.

Bishop didn’t meet my eyes. “How much of that boy’s soul did you take?”

I couldn’t help but notice that he hadn’t replied to my “I’m sorry” with a breezy “it’s okay.” Couldn’t blame him for that.

I let out a shaky breath. “Not much.”

“Be careful. He’ll instinctively seek you out in the future so you can finish the job.”

“How do you know?” Kraven asked.

I was definitely ready to leave. I’d done more than enough damage for one night. Stephen wasn’t here so there was no reason to hang out a moment longer. I wanted to run home and hide my face from the world, but instead I tried to stay calm and not let anyone see how devastated I was. I said a quick goodbye to Sabrina and Kelly, who’d thankfully missed all of my drama while they’d been busy dancing.

Roth caught up with us at the front door past a poster advertising Wednesday’s “Halloween Bash.” We exited the club and the cool, late-October air immediately chilled me. Stars sparkled in the clear, black sky and the moon, along with the parking lot floodlights, lit up the night around us. I ignored the cold, instead pulling my too-thin coat tighter around my shoulders.

Roth scanned the three of us silently trudging along the sidewalk. “Did I miss something?”

“Me and gray-girl just made out,” Kraven said.

Roth made a face. “Disgusting. Why would you want to kiss something like her?”

I expected no less from Roth. I was well aware that he despised me. Tonight only proved that I was in more trouble than I thought.

I scanned the night surrounding us, anything to take my attention off what had happened with Colin and Kraven.

I took a deep breath and let it out. “To keep me out of trouble.”

At that moment I spotted something in the sky that grabbed my attention. I felt the color slowly drain from my face. “Can’t go home. Not yet.”

I pointed at the sky behind him where a familiar searchlight had just appeared in the distance—although I knew none of them could see it like I could. “Looks like you’re getting a new recruit.”

From Fear to Eternity

TOP PICK! “Rowen jumps from paranormal romance to paranormal mystery without skipping a beat…Here’s hoping Sarah will have many more adventures in her new series.”—RT Bookreviews on Blood Bath & Beyond