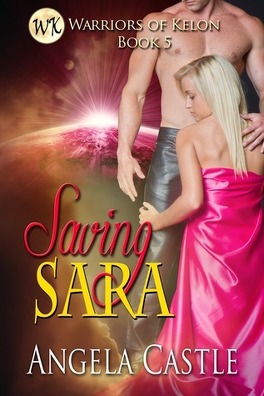 Sara, abducted from Earth by cruel aliens, is used as a torture slave and left to die.

Solron, a healer of Kelon, is annoyed at being ordered to go on a cleanup mission to check abandoned enemy war bases. When he and the crew discover a small human woman on the brink of death, Solron manages to save her. But the beautiful little human stirs more within him than his need to heal. Under Solron’s care, Sara falls deeply in love with the alien doctor and he claims her for himself. But when confronted by the Xerson who tortured her, Solron demands a fight with him.

Sara knows she has no choice but to let them fight, but will she now lose the man she loves to the curled Xerson, or will justice at last be served?

Sarah knew death would come, she only wished it would come sooner.

Her captors kept her alive because it amused them to inflict pain and watch her suffer.

In the back of her mind, distant memories of a home far away still lingered while hunger gnawed at her empty stomach. Forgotten was the smell of fresh air. Once, so long ago, she knew the sweet scent of cool mountain air and the feel of the wind wrapping around her body. Now, she inhaled in shallow breaths the foul, musty stench of her own feces, blood, and remnants of decaying creatures inside her small, cramped cell.

At first, she silently begged for forgiveness for any wrong she may have done to deserve this punishment. The burning pits of hell held more appeal than the ongoing nightmare she was forced to endure. How she longed to be free from the pain and injustice of her now wretched existence.

Never again would she see her family or her friends. Tears of self-pity and the hope of rescue dried up long ago. No human had such advanced space technology, fast-moving spaceships and a cruel beam of bright green light, which gripped her, held her immobile, until it delivered her into the clutches of these cruel, heartless aliens. She was forever lost and alone.

The swoosh of air indicated her cell door opening. Groggily and weakly, she raised her head, careful not to lift her eyes too far, or it would earn her another agonizing jolt from the thick, metal collar firmly bolted around her throat.

She tried to ready herself, needing to obey the commands of her masters. Her quick compliance helped avoid the pain. Not that it mattered anymore; perhaps she would disobey enough for them to finally kill her.

Inwardly, she rebelled; outwardly, she was a coward. It hurt too much, and she didn’t want the pain anymore. ‘A weak, pathetic human,’ the Xersons repeatedly called her. She agreed.

Several Xersons entered her cell area. Xersons were as big as grizzly bears. Their bristly fur covered more than half of their bodies and they had pointed snouts and humanlike eyes, yet what she feared the most were not their clawlike hands. Their teeth often gnashed at her, displaying crooked, sharp fangs smeared in greenish saliva.

Often they threatened to tear her apart with those teeth, only to then laugh at her fear.

“We’ve cleared out the base. The only thing left is this,” growled the low voice of the first Xerson.

“The human is useless. I bought it for my amusement and it’s served its purpose. The valuable breeding slaves are already secure. This one will only take up space. Leave it. It will be dead before long.”

Sara recognized the voice of the one who enjoyed inflicting pain and humiliation on her the most. It took her a split second to understand that they were leaving her to die and abandoning the station where she was kept. Their amused laughter faded away as the door slid closed again.

Fresh tears rolled down her cheeks and she collapsed back onto the dirty, cold floor waiting for her life to end.