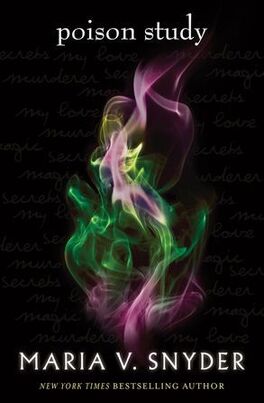 The body hit the floor with a thud. After a few more convulsions, the man died with a final breathy exhale.

Glancing up, the Commander put the file he'd been reading down onto his neat desk. "What was wrong with this one, Valek?"

"He'd grown sloppy and lazy. If only he'd taken his time, he wouldn't have died." Valek stood and grabbed the tray. "I'll get you some fresh breakfast."

"And train a new food taster. You'll have to take over the job until the next taster is ready. It's risky."

"Only if you don't know what you're doing." Valek stepped over the body.

"And have someone dispose of Oscar's body."

"And don't play around with the next guy. Train him quick."

Valek paused at the threshold. "Her. The next person scheduled for execution is female."

"The one who murdered General Brazell's son?" The Commander's voice held a weary indulgence. "You just can't leave that one alone. Can you?"

"There's more going on with her and I need to find out what it is."

"Just make sure it doesn't affect my meetings with him."

"Yes, sir." Valek wove through the maze of desks and clusters of officers in the throne room. But his thoughts were on the prisoner who was going to be offered the choice--execution or become the Commander's new food taster.

Only two people have chosen the noose since the Commander has taken over the Territory of Ixia fifteen years ago. Both had been loyal to the assassinated King of Ixia and chose death over working for the Commander. The rest had hoped to escape and, when they learned it was impossible, turned corrupt or lazy or both. Oscove had been selling secrets to their enemies, which Valek as the Chief of Security for Ixia tolerated until the risks outweighed the benefits.

Valek brought the Commander a clean plate of eggs then he arranged for the removal of Oscove's body before sending an agent to fetch the next prisoner on death row. Returning to his office, he cleared the files off the extra chair and settled at his desk. A breeze blew from the open window behind him and mid-morning sunlight warmed his back--the one perk of wearing an all black uniform--otherwise it was bloody hot.

Opening a dossier, he scanned the information on the prisoner. Yelena has been in the dungeon for almost a year. She was eighteen years old when she slit Reyad's throat with a knife, killing him. Valek noted that Reyad had been found on the bed in his room. The sheets soaked with his blood. The most obvious explanation--rape didn't quite fit. For one, she admitted to the murder, but didn't say why she killed him. Not that it mattered why to the Commander. He didn't tolerate homicide from the citizens of Ixia. Self-defense, accident, or pre-meditated--they all resulted in the same sentence. Death.

But it irked Valek. He wanted...no he needed an explanation. She had been one of Brazell's orphans. Raised with others who lost their parents, educated and doted on--if he believed the snide comments from the other Ixian generals. Why would she repay his kindness and generosity by murdering his only son? Something strange was going on with Reyad and perhaps Brazell as well. Valek hoped to find out.

Before Yelena arrived, Valek decided to downplay his interest in the circumstances surrounding her incarceration--act as if he doesn't care as long as she performs her job.

A light tap on his door announced the arrival of two dungeon guards, escorting the prisoner. They approached his desk. As Yelena scanned his office, Valek studied the sorry sight in front of him. Coated with muck, bleeding from various scrapes, wearing a tattered prison gown, the poor thing strained to remain upright under the weight of the chains hanging about her. The acrid dungeon stench wafting off her polluted the air. He hadn't expected her to be so...bedraggled and pathetic. She wouldn't survive the first test.

Valek met her gaze. An icy calm stared back at him--almost as if challenging him. Interesting.

"A woman? The next prisoner to be executed is a woman?" He used his most severe tone while pretending to be surprised.

The poor thing quivered and Valek felt a pang of guilt for being so harsh. Softening his voice, he said, "I should have taken the time to reread your dossier." Valek discharged the guards with a wave. "You're dismissed." After they left, he motioned for Yelena to sit down on the chair before she fell over.

Her chains jangled when she sat.

He flipped open her file and feigned reading the information. "Yelena, today may be your lucky day." Valek spotted a brief flare of anger before she bowed her head. She probably thought he referred to her impending execution. He had various reactions to that comment from the other food tasters. Most raged at him, thinking they had nothing left to lose. A couple picked up on the "may be" and allowed a glimmer of hope to show through.

"Well behaved and respectful. You're starting to look like a good candidate," he said, trying to goad her into a response.

Still avoiding his gaze, she studied the items on his desk instead of reacting to his comment.

He switched tactics. "You've been tried and found guilty of murdering General Brazell's only son, Reyad." Valek paused and stoked his temple as if suddenly making a realization. "That explains why Brazell's here this week, and why he has been unusually interested in the execution schedule."

Finally, the woman reacted, but not quite as expected. There was fear. However her body stiffened in...determination. Would she try to plead for her life?

"I suppose you're going to protest the conviction. Say you were framed or you killed out of self-defense." Valek leaned back, waiting.

Completely surprised, he straightened. He didn't know whether to be impressed or disappointed she didn't try to explain her actions. Either way, she managed to amaze him--something only a few people have done. Valek laughed. "This may work out better than I'd planned. Yelena, I'm offering you a choice. You can either be executed, or you can be Commander Ambrose's new food taster. His last taster died recently, and we need to fill the position."

Yelena stared at him in shock. "A fool would refuse the job."

"Well, it's a lifetime position. The training can be lethal. After all, how can you identify poisons in the Commander's food if you don't know what they taste like?" Valek paused to let the information sink in and to see if she'd jump in with questions. When she didn't, he continued, "You'll get a room in the castle to sleep, but most of the day you'll be with the Commander. No days off. No husband or children. Some prisoners have chosen execution instead. At least then they know exactly when they're going to die, rather than guessing if it's going to come with the next bite." He snapped his teeth together for effect.

Valek knew her thoughts were whirling by the way she trembled.

"Who tastes the Commander's food now?" she asked.

Interesting question. Was she still stunned or was she smarter than he thought? "I do. So I'm anxious to find a replacement. Also the Code of Behavior states that someone whose life is forfeit must be offered the job."

Yelena stood as if unable to keep still. She dragged her chains with her as she explored his office. Valek wondered what she was thinking. He hoped she'd take the position.

She faced him, and he asked, "What shall I tell the executioner?"

No she wasn't. Not at all. Valek suppressed a grin, getting to know her was going to be an enjoyable challenge.