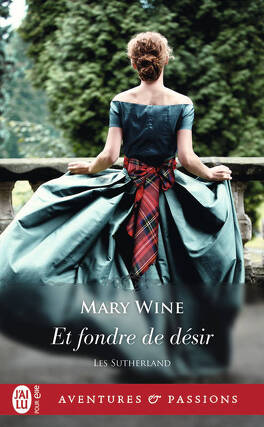 She recognized Gahan’s voice instantly. It was slightly unnerving how swiftly she identified him.

“Yer sister would have found it beneath her,” he added.

Gahan parted from the shadow of a doorway. The hall was farther behind her than she’d realized; the setting of the supper table was now only a dim buzz. A strange twist of excitement went through her belly, startling her. But it also left a bitter taste in her mouth, because she realized she preferred Gahan to her groom.

It was knowledge she could have done well without.

“Nae that I’d expect any less of any woman wedding such an old man,” Gahan informed her.

His tone was condescending at best, and it irritated her. He was her better. The fine weave of his kilt and the silver buttons running up the sides of his knee-high boots showed off just how much his father gave him. She should have kept her mouth shut, but her pride flared up and she propped her hand onto her hip.

“And will yer father give ye any choice when he contracts a bride for ye?” She questioned boldly “Or will ye turn yer nose up no matter who is depending upon ye to do yer duty? Like a spoiled child who knows naught of the way alliances keep a clan safe?”

His eyes narrowed. For a moment, it looked like he was considering what she said, almost as if she’d surprised him somehow.

“Nae if me duty includes making sure me kin can start a feud.”

“I have no such desire.” She shouldn’t snap at him but just couldn’t squelch the urge. “A contented man”—she had to stop to swallow the lump lodged in her throat—“is happy to stay at home.”

He studied her for a long moment, one that felt far longer than it really could have been. She felt like he was looking at her thoughts, his gaze cutting past her realistic reasons, to see her true feelings.

“So what is it that draws ye to a man old enough to be yer grandfather? The title? I suppose I can believe that. Yer sister was certainly enchanted by titles.”

“Half sister.” She paused, realizing that what Bari had so often used to insult her was something she prided herself on.

“And I’m bastard-born,” he replied softly. “Which changes nothing when it comes to me loyalties. Or, I doubt, yers.”

He was trying to intimidate her, but instead, his words somehow impressed her. There was something in his dark eyes that intrigued her, and she stared into the dark orbs, trying to decipher it.

He crossed his arms over his chest, and she suddenly realized just how close he was. There was no more than a pace between them now, and she jumped back, colliding with the hard stone of the wall. His lips twitched.

“I admit, ye play the innocent better then Sandra ever did, but ye’ll nae find it simple to seduce me.”

She straightened up, stepping away from the wall as her temper simmered. “Ye have no right to accuse me of nae being innocent. Or of trying to act like a harlot. Ye were the one waiting in the shadows.”

His lips parted to flash his teeth at her. “I knew ye had claws. Ye are a Fraser after all.”

How to Handle a Highlander

There was a ring of triumph in his tone, which irritated her beyond every bit of self-discipline she had.

“What I have is the sense to know when I’m hearing naught but dribble. Son of an earl or nae, ye do nae have the right to insult me for obeying me laird. I do nae need the Matheson thinking I turned up me nose at their laird. Marriage is for forming alliances. I’m nae so selfish as to think an insult to a laird, like refusing his offer, will nae become a festering point of contention.”

But her voice lowered as she finished, and she had to push the last sentence past her lips because she just didn’t want to believe she was one day away from having to wed Achaius Matheson.

“And I was nae trying to seduce ye,” she added.

His grin remained arrogant and large, but he opened his arms, offering her a view of just how wide his chest was. “Ye were looking into me eyes.”

“And ye were looking into mine,” she countered. He was suddenly too large and the hallway far too compact to suit her. “Enough arrogance. Perhaps ye are accustomed to only the sort of women who like to seduce, but I am nae of that sort. I’m set to wed, and I do nae think it wise to be standing here acting like—”

His voice dipped low and sent a tingle along her limbs. There was a gleam of mischief in his dark eyes.

She shook her head, her tongue feeling frozen with shock.

“Nay, we are nae acting like lovers, or are ye arguing that we are nae lovers—yet?” He pressed forward another few inches.

Something snapped inside her. She gasped and went to shove him away from her.

She flattened her hands against his chest, but he didn’t budge. She’d used a fair amount of strength, but Gahan Sutherland only chuckled at her attempt to move him.

“Ye have no right to accuse me of such indecent things. Maybe there are plenty who would remind me that ye’re me better and can say what ye will, but I will do me duty.”

He closed his hands around hers, but he didn’t remove them from his chest. Instead, he trapped her there with her hands upon him.

“What if I told ye I would nae be opposed to becoming yer lover? I promise ye will find me bed more to yer liking.”

Her mouth dropped open, and her temper exploded. She never really thought about what she was doing; her body simply refused to remain still. With a snarl, she sent her knee toward his unprotected groin. One moment he was chuckling at her, and the next, she felt her blow connecting. Pain flashed across his face as he whipped into action. She was free in a moment, but his hand rose into position to deliver a strike to her jaw.

She realized she’d never really seen his emotions, because his face became a mask of fury now, yet it was mixed with self-loathing. He lowered his fist and sucked in a deep breath.

“I would nae have hit ye. Me hand went up out of reflex. Ye have to expect that when ye deliver such a low blow to a man.”

She believed him, which was foolish, because men didn’t suffer the sort of thing she’d done to him well. Especially one of noble blood like him. He might have her lashed, but even that knowledge didn’t keep her silent.

How to Handle a Highlander

“Ye should expect such a reaction when ye pin innocents in dark hallways and try and blame them for yer own suspicious nature.”

His face tightened. “Yer sister almost killed me father. That is nae suspicion. It is proven.”

“Which is why ye should leave. Bari is nae content—”

She was saying too much, letting her thoughts spill past her lips without considering the consequences. She needed to prevent bloodshed, not give Gahan Sutherland solid reason to go looking for Bari’s blood. Even if she knew Bari deserved it.

Gahan’s voice was soft, but there was a flame flickering in his dark eyes that terrified her. She hadn’t been afraid of him until that moment, because she was certain she was looking at the rage churning inside him over almost losing his father. She felt his pain but was powerless to soothe it.

“I cannae help ye, no more than I can stop me own wedding.”