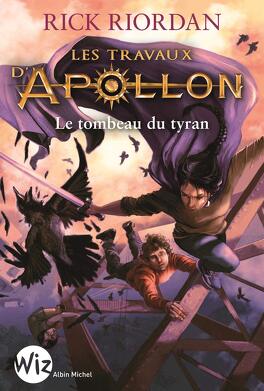 Once again, I had broken the First Law of Percy Jackson : Never say something is going to work out, because, as soon as you do, it won't.

There is no food here

Meg ate all the Swedish fish

Please get off my hearse

I believe in returning dead bodies.

It seems like a simple courtesy, doesn’t it? A warrior dies, you should do what you can to get their body back to their people for funerary rites. Maybe I’m old-fashioned. I am over four thousand years old. But I find it rude not to properly dispose of corpses.

Achilles during the Trojan War, for instance. Total pig. He chariot-dragged the body of the Trojan champion Hector around the walls of the city for days. Finally I convinced Zeus to pressure the big bully into returning Hector’s body to his parents so he could have a decent burial. I mean, come on. Have a little respect for the people you slaughter.

Then there was Oliver Cromwell’s corpse. I wasn’t a fan of the man, but please. First, the English bury him with honors. Then they decide they hate him, so they dig him up and “execute” his body. Then his head falls off the pike where it’s been impaled for decades and gets passed around from collector to collector for almost three centuries like a disgusting souvenir snow globe. Finally, in 1960, I whispered in the ears of some influential people, Enough, already. I am the god Apollo, and I order you to bury that thing. You’re grossing me out.

When it came to Jason Grace, my fallen friend and half brother, I wasn’t going to leave anything to chance. I would personally escort his coffin to Camp Jupiter and see him off with full honors.

That turned out to be a good call. What with the ghouls attacking us and everything.

Sunset turned San Francisco Bay into a cauldron of molten copper as our private plane landed at Oakland Airport. I say our private plane. The chartered trip was actually a parting gift from our friend Piper McLean and her movie star father. (Everyone should have at least one friend with a movie star parent.)

Spare me your fiery doom

I'm not feeling it