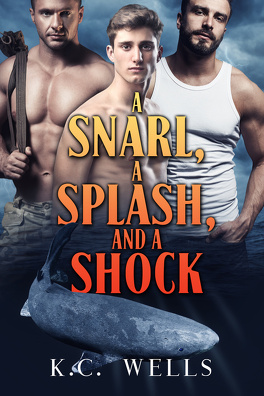 As part of a military team, Crank needs to keep his head on straight. His unit depends on it. So the recurring sensual dreams he’s having—the ones featuring a shark shifter with dark brown hair and eyes—really screw with his focus. Especially since the shifter is a guy.

Greenland shark shifter Vic can’t stop thinking about Crank, a human military guy he met when Vic got called in for a consult. Crank seems handy with anything that flies, and Vic would be happy to have him at his back, in more ways than one. And that’s a problem—firstly because Vic’s in love with his boyfriend, Saul, but also because Crank is sarcastic, irreverent… and straight.

The problem comes to a head when Saul discovers Vic has been dreaming about a man who isn’t him. Saul does not share. But when Crank starts invading Saul’s dreams too, he has to reassess his feelings. His life may depend on it.

Exploring the growing connection between the three of them will have to wait, though. The upcoming mission demands the team’s full attention. They’re about to discover something huge, and they have badly underestimated the enemy…