Memory of Scorpions, Tome 3 : A Taste for Poison 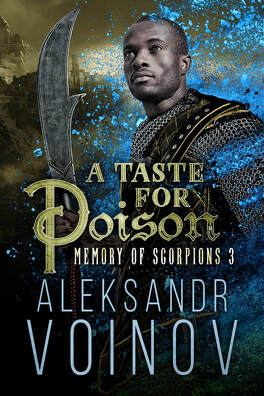 Even a king gets stung when he reaches for a scorpion.

After barely surviving an assassination attempt, King Adrastes is a changed man—one who mistrusts even his allies and friends. He readies his Empire for war against an enigmatic enemy, the Elder of Vededrin, but not everyone approves. While courtiers dare only to whisper dissent, an outrider called Death foments rebellion in the mountains, aided by a prophecy that promises he’ll stop the Black King.

Kendras—former lover to Adrastes and leader of the Scorpions—is sent with his elite mercenary force to bring Death to justice. But when Kendras learns who’s hiding behind the mask, he must choose between his lover Graukar, newly-appointed general to the king—and King Adrastes himself.

With no man to call master, the Scorpions could flee the danger and intrigue. But Kendras cannot abandon the man he once loved—or the man he’s growing to love—without first uncovering the real threat to the Empire.

Memory of Scorpions, Tome 3 : A Taste for Poison