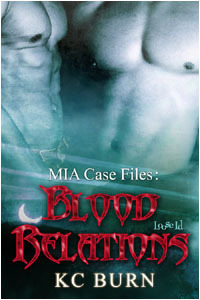 Agent Cooper Wallace doesn’t expect meet the love of his life while hunting an Umbrae-possessed vampire. Nor does he expect a scorching one night stand to lead to a lasting relationship. Meeting Frazer Nyland challenges a lot of Cooper’s expectations, though. Unfortunately, Cooper also doesn’t expect his investigation of missing men to lead him to Frazer’s home town and the discovery that the disappearances can all be connected to Frazer.

The police suspect Frazer is a serial killer. Cooper’s agency suspects Frazer is a vicious, bloodthirsty vampire. Cooper is determined to prove them wrong, despite an obsessive cop who’ll stop at nothing to take Frazer down. But the clues mount up, and Cooper begins to believe Frazer might be the killer. The realization comes too late, because Cooper’s already done the unforgivable -- he’s fallen in love with an Umbrae.

If Cooper does his job and closes the Umbrae’s portal, at best, he will destroy Frazer’s memories of their love. At worst, Cooper’s action will kill Frazer. Can Cooper do what’s right and save the lives of nameless, faceless innocents if the price is the death of the man he loves?