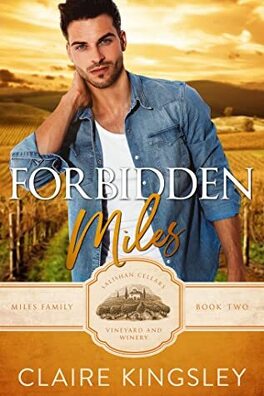 “You're not supposed to fall for your brothers best friend.”

Brynn Miles thought moving back to her family’s winery was a good idea. But when you’re the baby of the family, life can get complicated. Dating? Forget about it. Not with her three older brothers acting like human chastity belts.

To Chase Reilly, his best friend’s little sister has always been invisible. She’s so forbidden, he doesn’t let himself see her. Besides, she’s totally girlfriend material, and he doesn’t do the relationship thing.

Until the night Chase sees her. Really, truly sees her. And nothing will ever be the same.

Looking for love isn’t Brynn’s focus, and Chase is the one guy in the world she can’t fall for. He’s T-R-O-U-B-L-E. Untouchable. And just as forbidden as she is.

But once Chase set his sights on Brynn, there isn’t anything—or anyone—who’ll stop him.

Author’s note: A childhood crush. An irresistible attraction. The cutest scavenger hunt ever. And a surprisingly sweet hero who puts it all on the line when he falls head over heels for the one girl he can’t have.

The Miles Family series is best enjoyed in order.