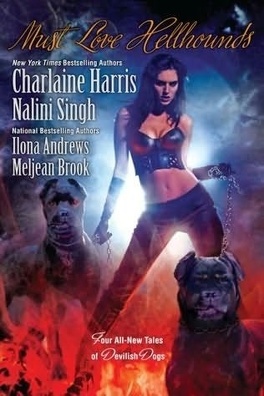 Follow paranormal bodyguards Clovache and Batanya into Lucifer's realm, where they encounter his fearsome four-legged pets, in Charlaine Harris's The Britlingens Go to Hell. Seek out a traitor in the midst of a guild of non- lethal vampire trackers, one that intends to eradicate the entire species of bloodsuckers, in Nalini Singh's Angels' Judgment. Find out why the giant three-headed dog that guards the gates of Hades has left the underworld for the real world - and whose scent he's following - in Ilona Andrews's Magic Mourns. Embark on a perilous search for the kidnapped niece of a powerful vampire alongside her blind - and damn sexy - companion and a hellhound in Meljean Brook's Blind Spot.

“Outside I hopped into our vehicle, the taint of vampiric magic clinging to me like greasy smoke.

“Like walking into a room after a day of work, falling into bed, and realizing the sheets are covered in cold K-Y jelly,” Raphael said.

I just stared at him.

“With a funky smell,” he added.

My Order conditioning failed me. “Ew.”

“I‟m not even going to ask if that‟s happened to you.”

I started the vehicle. “Has that happened to you?”

“In the bouda house. I was really tired and you‟ve seen that place: everything smells like sex . . .”

“I don‟t want to know.” I peeled out of the parking lot.

"So where are we going?”

“To Spider Lynn‟s house. We‟re going to dig through her trash, and if that doesn‟t work, we‟ll do some breaking and entering.”

Raphael frowned. “Do you know where she lives?”

“Yes. I memorized the addresses of all the Masters of the Dead in the city. I have a lot of time on my hands.”

He squinted at me, looking remarkably like a gentleman pirate from my favorite romance novels. “What else do you store in your head?”

“This and that. I remember the first thing you ever said to me. You know, when you carried me from the cart into the tub so your mother could fix me.”

“I imagine it was something very romantic,” he said. “Something along the lines of „I‟ve got you‟ or „I won‟t let you die.‟

“I was bleeding in the bathtub, trying to realign my bones, and my hyena glands voided from the pain. You said, „Don‟t worry, we have an excellent filtration system.‟”

The look on his face was priceless.

“That can‟t be the first thing.”

We drove in silence.

“About the K-Y,” Raphael said.

“Once I washed it out of my hair—”

“Raphael, why are you doing this?”

“Why in the world would you want to do that?”

“It‟s an irrepressible male impulse. It just has to be done. As I was saying, once I washed it out—”

“Look under the passenger seat in a black plastic bin. There should be a book.”

Raphael hopped out, dug under the seat, and pulled out a dog-eared copy of The Almanac of Mystical Creatures.

Raphael flipped the book open and held it up. On the left page a lithograph showed a three-headed dog with a serpent for a tail. The caption under the picture said CERBERUS.

“Is that your dog?” Kate asked.

“Could be. How the heck did you know the exact page?”

“I have perfect memory!”

She sighed into the phone.

“I spilled coffee on that page and had to leave the book open to dry it out. It always opens to that entry now.”