My Life Next Door, Tome 2 : The Boy Most Likely To 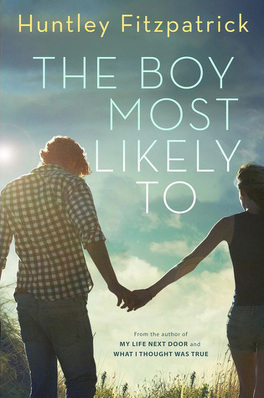 Surprises abound and sparks ignite in the highly anticipated, utterly romantic companion to My Life Next Door

Tim Mason was The Boy Most Likely To:

- drive his car into a house

Alice Garrett was The Girl Most Likely To:

For Tim, it wouldn’t be smart to fall for Alice. For Alice, nothing could be scarier than falling for Tim. But Tim has never been known for making the smart choice, and Alice is starting to wonder if the “smart” choice is always the right one. When these two crash into each other, they crash hard.

Then the unexpected consequences of Tim’s wild days come back to shock him. He finds himself in a situation that isn’t all it appears to be, that he never could have predicted . . . but maybe should have.

And Alice is caught in the middle.

Told in Tim’s and Alice’s distinctive, disarming, entirely compelling voices, this return to the world of My Life Next Door is a story about failing first, trying again, and having to decide whether to risk it all once more.

My Life Next Door, Tome 2 : The Boy Most Likely To

“Mom wanted me to bring it and to—” She stops dead.

“Are you?” Her voice is sharp. “Are you in trouble again or something?”

“Some woman, or girl, or whatever—keeps calling, asking for you. Do you owe anyone money? I—know what Dad said to you. If you need money, I have—”

“Nan, kid, I’m fine. I don’t owe anyone anything but a shitload of apologies. Don’t stress. It’ll affect your grade point average.”

Her cheeks flame at that last and she says, “I . . . I’ve been doing my college applications. Starting them. So maybe I can be early-decision, I won’t have to freak out all year. And—”