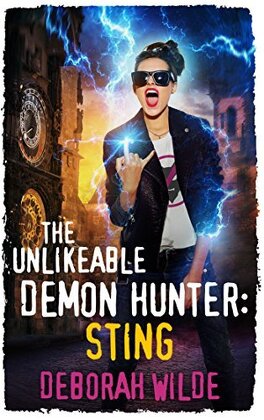 After a bumpy start as the only female demon hunter in the top secret Brotherhood of David, Nava Katz heads to Prague for her first undercover mission: unmasking a demon movie star. She’d be all kinds of thrilled if it weren’t for the fact that her fellow hunter-with-benefits, Rohan Mitra, has reclaimed his rock star status and assigned Nava the role of groupie.

Rejecting her “be a good girl and follow orders” directive, Nava unleashes an alter ego guaranteed to hook their celebrity target and drive Rohan crazy. No downside–until she finds herself up against Rohan’s past, the Brotherhood’s antiquated thinking, and her own identity issues, turning her personal life into a bomb that could blow up the entire operation.

Sparkly and deadly; it’s a plan.

“Shove it in already,” I said through gritted teeth. My back was freezing from the damp, flaking basement concrete I lay against, while the two-foot-long, rat-shaped demon pinning me down was doing shit for my front.

Rohan Mitra, rock star turned demon hunter, shook his tousled dark hair, his full lips puckering in obvious disgust. “I’m not putting my finger in there. You want it so badly, do it yourself.”

I slammed an elbow into the underside of the vral’s jaw, whipping her head sideways, intent on keeping the demon’s double row of razor-sharp incisors out of my shoulder. One bite and I’d be paralyzed.

“Now you’re going to get all pussy about sticking your finger places it doesn’t belong?”

“I’ll reconsider if she begs as nicely as you did, Nava.”

The vral snapped her teeth, the sound a loud crack in my ear. Her dank, rotten-meat belch wafted over me.

I tried to plug my nose with my shoulder, my arm muscles straining with the exertion of holding her at bay. “Bite me, Mitra.”

He sipped his latte, standing there immaculate and infuriating in a camel-colored trench coat more appropriate to a night at the theater than a demon raid. A raid, it turned out, Rohan had no intention of participating in, deeming it “a training exercise for the newbie.”

Overhead, a bulb sizzled and popped out, dimming the light and casting almost-romantic shadows over the warped structural beams and grotty walls.

Rohan had the gall to check his watch.

“Don’t let me keep you from anything.” I shot lightning bolts at the vral from my eyes and she jerked, her weight almost off me. Hand blasts were so level one. I rolled sideways, but the demon crashed back down on top of me. The two of us tumbled into the shadows, her teeth flashing in and out of the darkness.

“Then finish her,” he said.

Rohan took another sip. “Make her want it.”

Continued grappling with the demon wasn’t going to get me anywhere other than exhausted and then dead. Fine, mostly dead. Rohan wouldn’t let me be unequivocally taken out.