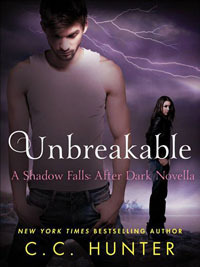 He isn't everything he says he is. He's even more...

Who is Chase Tallman, the newest member of Shadow Falls? What made him into the sexy, mysterious vampire he is today? And what led him to Della Tsang?

Step back in time and unearth the secrets that haunt him. The secret of how he became a vampire-and how he knows so much about being reborn. Secrets about his first love, his family--and what steers him toward Della, the beautiful, complicated girl he just can't seem to stay away from. The one who makes him want things he thought he'd given up on long ago.

It all began with a research study, a palm reader, and a plane crash that sent him on a quest...for a love that's unbreakable.

According to a statement from Sheriff Ted Carter, wreckage of a Cessna 210, believed to be the same one flown by Dr. Edward Tallman, was spotted in the Jasper Mountain Range. A SAR (Search and Rescue) team was called in when twenty minutes after takeoff the plane fell off radar yesterday at 4:20. Two helicopters from Mountain Rescue Association (MRA) searched the perimeter of the area yesterday but didn’t spot the downed plane until this morning. Due to low clouds and high winds, visibility of the crash site was poor and they were unable to spot any signs of survivors. Flying with Dr. Tallman were his wife, Amy, their two teenage children, Mindy and Chase, as well as a family friend, Tami Collins.

Emergency ground crews have been put on call, but are waiting for a break in the weather. A spokeswoman was quoted saying that they know it’s imperative to get to the site as soon as possible, but the safety of their crew must be considered.

It was speculated that Dr. Tallman and his family may have flown into Jasper to take part in a genetic study, however no local research facility reports any of the Tallmans’ participation. Meanwhile, friends of the Tallman family and the parents of Tami Collins are in Jasper praying the news will be good once Search and Rescue teams are on the ground.