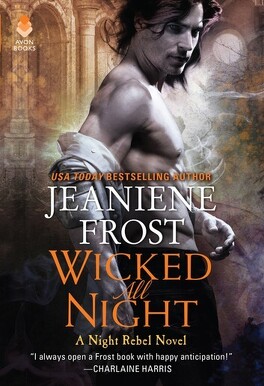 A gift from the gods…

Veritas and Ian have finally defeated their worst enemy, but the power it took to pierce through to the netherworld has unexpected consequences. Soon, Veritas is forced to rely on the last person she trusts—a golden deity named Phanes, who seeks far more than a temporary alliance with the beautiful vampire.

But an escape from the netherworld soon pits Veritas and Ian against supernatural beings seeking to rule over mortals once again. Now, they must rally friends and foes alike—if the vampire council doesn’t execute Veritas first. Plus, a wedge between Veritas and Ian threatens to destroy their love. Can they stand together against the unearthly powers about to be unleashed? Or does their love—and humanity—not stand a chance?

Two hard knocks on the door woke me. I hadn’t intended to fall asleep after Ian made good on his promise to fuck me into a state of temporary muteness, but I had. Then again, I’d done a lot of things I hadn’t intended to do over the past two days. What was that saying about making the gods laugh? All you had to do was tell them your plans?

“Sod off, whoever you are,” Ian said without opening his eyes.

The door burst open in a shower of wood, revealing Cat.

Ian cursed as he leapt up from the bed. “Really, Reaper? Kicking the door in? This isn’t even your house.”

“I know, but this news is important and I drew the short straw, so I’m here and Spade isn’t,” Cat replied, looking anywhere except at Ian. “Figured it was the best time to interrupt since the horses finally quit stomping up their stalls from all the racket. Unless that banging around was you two and not the horses? Wait, don’t answer that. I don’t want to know.”

I got out of bed, too. Now Cat was almost staring at the ceiling to avoid looking at our nakedness. How silly.

“We don’t have anything you haven’t seen before,” I said before adding dryly, “even if I am Death’s direct descendant.”

“It’s not you,” Cat said, her strained tone proving that, if she were human, she’d be blushing. “It’s his, um…you know.”

“You barged in for a reason, so spare us your Puritan modesty and get to it,” Ian said impatiently. “Besides, you must have seen a cock piercing before, and if you haven’t, Crispin owes you an apology for being such an unimaginative lover.”

“Fine, let’s get this over with,” Cat muttered, and dropped her gaze below Ian’s waist.

“Wow,” she said after a stunned moment. “Really jammed that thing right in there, didn’t you?” Then, her head tilted to the side. “Is that one single bar straight through the tip? Or are there two different piercings on either side-?”

“Right,” Cat said, shaking her head as if to clear it. “What did I come in here for again? Oh, yeah. We’re all in deep shit.”