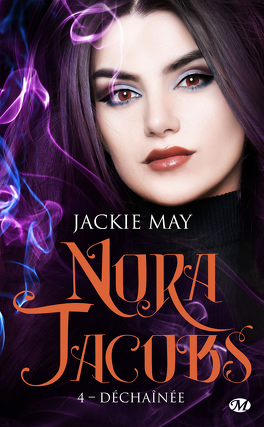 I sink into the water at first, but it only takes a second before I figure out how to kick my tail to hold myself up. The water welcomes me, and energy flows through me. It’s so vitalizing that a happy laugh escapes me. I twirl in a circle, giggling like a little girl playing in the sprinklers on a hot summer day, and tears of joy prick my eyes.

There are only three kinds of men in the world now: those who fear me, those who want me, and those who weren’t in the club the night I ensnared half the city’s underworld population with my siren’s song. Though most of that last option still fears me or wants me, a few of them are simply curious.

There’s only one type of woman: those who hate me.

The couple standing across the bar from me now falls into the fear and hate categories. I plaster my friendliest, most innocent smile on my face as I pass them their ordered drinks, but it does nothing to alleviate their moods. “Happy New Year,” I offer.

The male—practically cowering behind his female companion—won’t meet my eyes, and the female glares at me as she pays for the drinks like she thinks I’m going to steal her man. They walk off without a word, and I step back with a sigh.

I hate that people now avoid me or glare at me in contempt, judging me because of my potential to be evil instead of how I actually act. I’m a nice person. People like me. I’m approachable. At least, I used to be.

My mood lifts at the nickname, and I manage a small smile for my boss. I’m not married to Wulf’s brother, so not technically an in-law, but ever since I started dating Rook and he moved into the den with me, Wulf’s claimed me as the little sister he never had. I let him. Blood or not, he’s family, and I like having a big brother.

He puts his arm around my shoulder, and I lean into his side hug, soaking up his affection and using it to bolster my mood. “I don’t know if I’m going to be able to keep this job.”

“But you love this job.”

It’s true. I never considered bartending until Terrance dropped the job in my lap, but I quickly found a home-away-from-home here at the club. Once I stopped fearing underworlders, I loved interacting with them. I’m surprisingly social, and I love chatting with people. That’s why the siren stigma is so depressing. “I make people uncomfortable.”

Wulf frowns. His eyes drift in the direction the glaring couple walked off in. “Screw those assholes,” he says. “You’re the kindest, friendliest, most caring person I’ve ever met. If they can’t see that, then they don’t deserve to know you.”

Another small smile ghosts across my face. Wulf is the best. But his compliments, as much as I love them, don’t quite take the sting out of all the rejection I’ve been dealing with the last couple of weeks.

“People will get used to the idea,” he promises me. “It’s only been a few weeks. Don’t quit your job. Stay here; stay visible. Soon enough, people will see that you’re not going to turn into some psycho man-eater, and then everyone will love you again. If you quit and hide yourself away, the gossip will only get worse, and people will become truly afraid of you. It’s been nice not having anyone try to kill you these last couple weeks. I’d rather like to keep it that way.”

I snort, but there’s some sound logic in his words. I superstitiously knock my knuckles on the wood bar. Wulf grins and gives me one more supportive squeeze before he lets me go. He kisses my temple and whispers “Hang in there, kiddo” before stepping away to finally acknowledge the group of waiting customers we’ve both been ignoring.

I take a deep breath and steel my nerves before getting back to work. A man with the face of an angel, golden hair, and oddly beautiful pale pink eyes gives me a bright, mischievous smile. It’s the first truly friendly smile I’ve received all night. I’m guessing he’s in the rare third category of men. He may be interested in me, but it’s not the needy, drugged-up want that the men I enchanted usually display. He seems too casual, and there’s too much curiosity in his eyes.

Before I can argue further, Nick’s body blurs, and in a blink he’s standing in front of me as a massive black dragon. Dark and sleek, with horns on his head and spikes on his tail, the creature looks deadly in a beautiful way. He’s absolutely breathtaking.

Nick shakes his head, still distracted and staring out at the lake. “We’re going to fly.”

I don’t get it at first. When I don’t respond right away, he finally pulls himself from his thoughts. “You said you wanted to see my dragon.”

Oliver grins. “Or our deadly assassin is secretly a romantic.”

I snort a disbelieving laugh, but Oliver raises a challenging brow. “He did bind himself to you on the hope that one day you would love him.”

I open my mouth, but no argument comes out. Illren really did do that. I sigh in defeat.