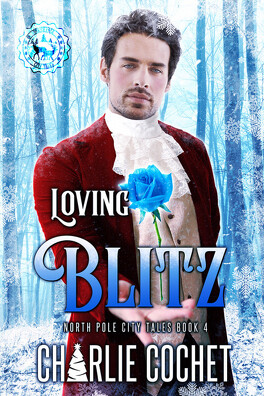 From North Pole City to Winter Wonderland, preparations are underway after a royal announcement sweeps everyone into a frenzy of festivity. At the heart of the celebration are the city’s most beloved elf pilots, the Rein Dears. Once the Big Flight is behind them, the pilots prepare for the royal event. Assigned a special task of finding an Elska rose, Cupid and Blitzen are unaware of how their friendship is about to change forever.

Yet not all that glitters is gold. The sweet, angelic Cupid hides a dark secret, one that threatens to destroy his Rein Dear status, his friends, and the elf who’s captured his heart. It’s up to Blitzen to help Cupid see the light in the darkness and show him that together they can mend broken hearts.

Blitz was right, this dance was for sweethearts, but it was so much fun. Besides, there was no one he wanted to dance it with other than Blitz. It was an odd sentiment to have toward his friend, but he enjoyed dancing with Blitz too much to care or give it any more thought. And seeing as how Blitz was currently without a beau, there was no reason for them not to dance together.

Everyone held hands and they danced in a loop. They stopped so Vixen could break from the group and take Cupid’s hand. The two of them danced in a circle before parting. Vixen took Vale’s hand while Cupid took Blitz’s. They whirled, then switched partners again.

Jack was in especially good spirits, twirling Rudy at the end of his turn and making Rudy laugh before they switched partners. The circle continued, this time with small lifts instead of taking hands. Cupid couldn’t help his giggle when Blitz took hold of his waist and lifted him off his feet. The lifts were really meant to be hops, but Blitz could lift Cupid without the least bit of effort. The pairs broke off into a scandalous version of a waltz where they were all but pressed up against each other. As always, Cupid was forced to look up to meet Blitz’s eyes.

“I can see why you enjoy this. It’s fun and very sweet.” Blitz’s hand pressed ever so subtly against Cupid’s lower back when they turned, and the strangest tingle went up Cupid’s spine. That was… unusual.

“Are you all right?” Blitz asked so only Cupid could hear.

“Yes, of course. Why wouldn’t I be?” Cupid smiled. Was his face red? It felt a little hot.

“Your cheeks are flushed. More than usual. Are you tired? Would you like to stop?”

“I’m fine,” Cupid reassured him. He hated that he made Blitz worry. Maybe it was the champagne. He wasn’t very good at all the bubbly stuff. Two glasses was usually his limit. Though now that he thought about it, he’d only had one, and not even a full glass at that.

“All right. But you’ll tell me if you’re feeling unwell?”

They finished the waltz when Cupid noticed everyone moving on to the next part. Plum pudding! “I forgot about this part.” The very last dance included giving your sweetheart a kiss. That was all very well and good for the other elves in the circle, but…. Cupid turned to Blitz, who shrugged.

Cupid nodded. He wasn’t quite certain he would survive. This evening was taking a somewhat unexpected turn. The two of them were very close. They’d snuggled together on the love seat at the White Hart or at the Rein Dear Estates in the lobby. Usually with cups of hot cocoa, and sometimes in front of the fire. It was Cupid’s favorite spot. At times they’d even fallen asleep together. But kiss?

Everyone leaned forward and puckered up. Cupid did the same. Sort of. He stood on his toes and Blitz bent at the waist to meet him. The kiss was a small, quick press of the lips. A spark unlike Cupid had ever felt spread through him when Blitz’s lips touched his own. It took Cupid by surprise and he jerked back, his fingers going to his lips. Blitz’s eyes were wide, and it was clear he was as startled as Cupid. The circle broke off into applause, drawing their attention and snapping them out of whatever trance they had been in.