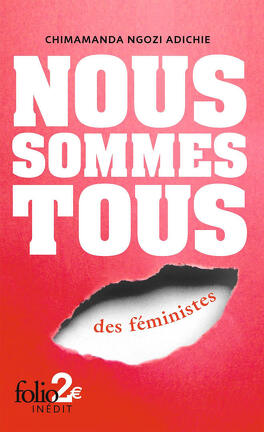 I have chosen to no longer be apologetic for my femininity. And I want to be respected in all my femaleness. Because I deserve to be

Okoloma was one of my greatest childhood friends. He lived on my street and looked after me like a big brother: if I liked a boy, I would ask Okoloma’s opinion. Okoloma was funny and intelligent and wore cowboy boots that were pointy at the tips. In December 2005, in a plane crash in southern Nigeria, Okoloma died. It is still hard for me to put into words how I felt. Okoloma was a person I could argue with, laugh with and truly talk to. He was also the first person to call me a feminist.

I was about fourteen. We were in his house, arguing, both of us bristling with half- baked knowledge from the books we had read. I don’t remember what this particular argument was about. But I remember that as I argued and argued, Okoloma looked at me and said, ‘You know, you’re a feminist.’

It was not a compliment. I could tell from his tone – the same tone with which a person would say, ‘You’re a supporter of terrorism.’

I did not know exactly what this word feminist meant. And I did not want Okoloma to know that I didn’t know. So I brushed it aside and continued to argue. The first thing I planned to do when I got home was look up the word in the dictionary.

Now fast-forward to some years later. In 2003, I wrote a novel called Purple Hibiscus, about a man who, among other things, beats his wife, and whose story doesn’t end too well. While I was promoting the novel in Nigeria, a journalist, a nice, well-meaning man, told me he wanted to advise me. (Nigerians, as you might know, are very quick to give unsolicited advice.)

He told me that people were saying my novel was feminist, and his advice to me – he was shaking his head sadly as he spoke – was that I should never call myself a feminist, since feminists are women who are unhappy because they cannot find husbands.

So I decided to call myself a Happy Feminist.